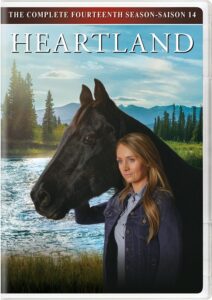 EXTRAS: Season 14; Graham Wardle’s Departure; The Horses of Heartland; Production During the Pandemic; Amber, Graham and the Cast; Graham’s Favorite Moments; The Future
—–While some journeys end, others are just beginning. Season 14 of Heartland find horses healing Amy (Amber Marshall) as much as Amy heals horses. While Amy struggles with a life-changing challenge, the entire town of Hudson will have to deal with an unexpected disaster that threatens to derail Lou’s (Michelle Morgan) first term as mayor. But the family will pull through together and be stronger as a result. Family is courage, and times change. 3-disc set. 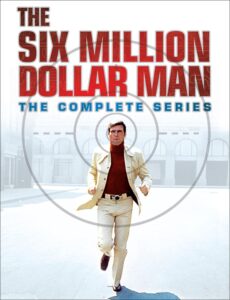 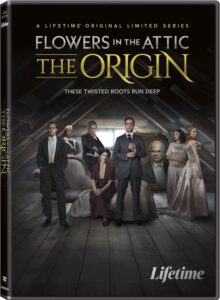 —–Based on the prequel novel GARDEN OF THE SHADOWS by Andrew Neiderman, FLOWERS IN THE ATTIC: THE ORIGIN chronicles the harrowing backstory of Olivia Winfield (Jemima Rooper) as she is wooed by the debonair Malcolm Foxworth (Max Irons). After a whirlwind romance, Olivia discovers the twisted truths lurking inside Foxworth Hall, and the fairytale life she expected becomes a nightmare…one that leads to her notorious decision to lock her grandchildren in the attic. Featuring a stellar cast that includes Kelsey Grammer, Harry Hamlin, Kate Mulgrew, Paul Wesley, Alana Boden, Hannah Dodd, T’Shan Williams, and Callum Kerr, this chilling 4-part limited series reveals the transformative power of true evil. 2-disc set. 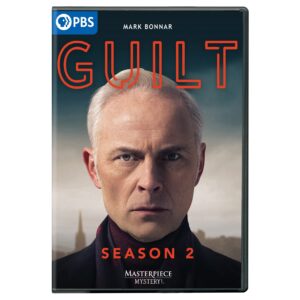 —–In the cellar of an Edinburgh house, two gunshots ring out. Across town, disgraced lawyer Max McCall (Mark Bonnar, Catastrophe) is released from prison. For the Leith area of Edinburgh, a bright new future is being promised. These events will entwine characters old and new, as they battle the consequences of their actions amidst shocking new developments. 2-disc set. 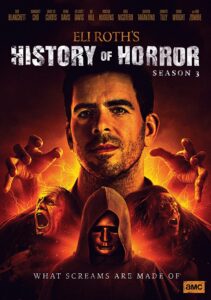 —–Award-winning horror film director, writer, producer and actor Eli Roth brings together the masters of horror – the storytellers and stars who define the genre – to explore its biggest themes and reveal the inspirations and struggles behind its past and present. Each one-hour episode will take viewers on a chilling exploration of how horror has evolved through the years and examine the genre’s impact on society as well as delving into how horror maintains its fan base and why audiences are addicted to fear. Season 3 of Eli Roth’s History of Horror continues with its winning combination of insightful interviews with masterfully-edited clips from films that have seared themselves into popular culture, framed through sub-genres that speak to the moment. 2-disc set in either format. 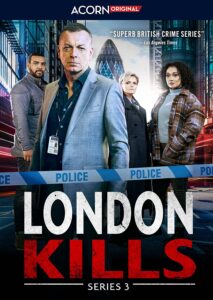 —–“One of Britain’s most thrilling series” (Entertainment Weekly) returns as the elite squad of detectives begin investigating a string of murders with links to the police force. Could the killer be a fellow officer? The case has deeply personal ramifications for the team led by DI David Bradford (Hugo Speer, Father Brown), involving DS Vivienne Cole’s (Sharon Small, The Inspector Lynley Mysteries) ex-husband and threats to DC Rob Brady’s (Bailey Patrick, Bridgerton) family. As they try to discover if a murderer lurks among their ranks, the detectives also investigate the death of a schoolboy that could be connected to a girl’s suicide, a widow who somewhat suspiciously refuses to grieve, and the fatal attack on a locksmith that harks back to the manslaughter of Trainee DC Billie Fitzgerald’s (Tori Allen-Martin, Unforgotten) father a decade earlier. 2-disc set. 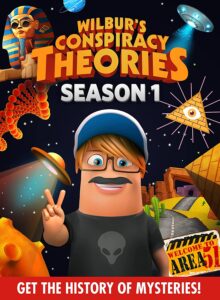 —–Welcome to Wilbur’s Weird And Wacky World! Where the latest x-files and conspiracy theories are blown open and made simple. From UFOs to government coverups and beyond, Wilbur is shining light on a dark web of lies! Single-disc title. 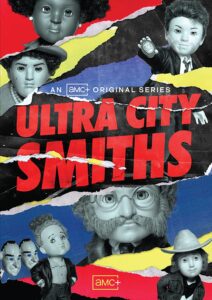 —–The Ultra City Smiths story unfolds via the stop-motion animation of baby dolls repurposed as a grown-up cast of characters. The series hinges on an investigation into the mysterious disappearance of fictional metropolis Ultra City’s most famous magnate (Kurtwood Smith). Two intrepid detectives (Jimmi Simpson and Da’Vine Joy Randolph) follow the case, rallying to fight against their city’s dangerous corruption, at a high cost to themselves and their families, all in pursuit of a gentler place to call home. 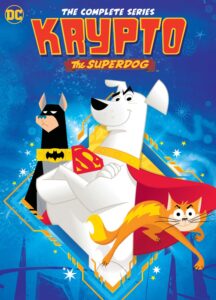 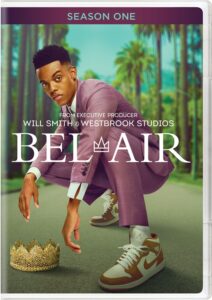 —–Set in modern-day America, Bel-Air imagines the beloved sitcom The Fresh Prince of Bel-Air through a new, dramatic take on Will’s complicated journey from the streets of West Philadelphia to the gated mansions of Bel-Air. As these two worlds collide, Will reckons with the power of second chances while navigating the conflicts, emotions, and biases of a world far different from the only one he’s ever known. Executive produced by Will Smith, and inspired by Morgan Cooper’s viral trailer that reimagined the iconic, culture-defining ’90s sitcom, Bel-Air takes a fresh and raw approach to this world of swagger, style, and aspiration while exploring Will’s complex journey through a current lens. The series features an ensemble cast that introduces Jabari Banks as Will and a creative team that includes Cooper, who serves as director, co-writer, and executive producer, and co-showrunners and executive producers T.J. Brady and Rasheed Newson. 3-disc set. 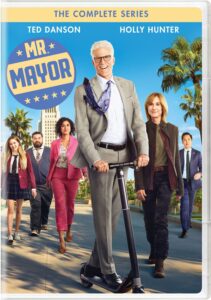 EXTRAS: Mr. Mayor’s Magical L.A. Christmas
—–Mayor Neil Bremer (Ted Danson) serves the great city of Los Angeles in Mr. Mayor, the hit workplace comedy from executive producers Tina Fey and Robert Carlock. In this complete series set, Mayor Bremer has his work cut out for him at city hall as he tries to do right by the city that elected him and be a good father to his teenage daughter Orly (Kyla Kenedy). Luckily for Neil, he has a dedicated team of witty civil servants to keep him on track, including Deputy Mayor Arpi Meskimen (Holly Hunter), Chief of Staff Mikaela Shaw (Vella Lovell), Chief Strategist Tommy Tomás (Mike Cabellon) and Communications Director Jayden Kwapis (Bobby Moynihan). 2-disc set. 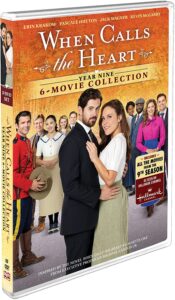 —–From celebrated author Janette Oke (the Love Comes Softly series) comes a rigorous and romantic adventure as epic as the wide frontier. Erin Krakow (Army Wives), Jack Wagner (Melrose Place), Pascale Hutton (Flashpoint), and Kevin McGarry (Heartland) star in When Calls The Heart, a beautiful story filled with “many of the values we all hold precious such as love, family, friendship, community, faith and caring about one another” (Military Press)! Return to Hope Valley with this six-movie collection from When Calls The Heart’s ninth season! Join schoolteacher Elizabeth Thornton (Krakow) and the kind and loving citizens of your favorite frontier town as they navigate the highs and lows of romance, friendship, and the progress that comes with the changing times they face. 3-disc set. 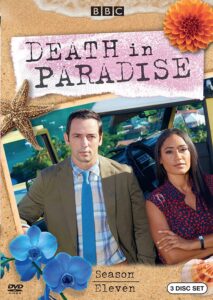 —–The sun-soaked, smash-hit whodunnit returns for more murder mysteries with a light touch and a warm heart. DI Neville Parker has more crimes to solve on the blissful island of Saint Marie, while also dealing with the emotional complications of working at close quarters with DS Florence Cassell. With the help of new recruits Naomi and Darlene, the team face some of their toughest cases ever. From a mysterious kidnapping gone awry to a skydiver stabbed in mid-air, things aren’t getting any easier for Neville and the team. Meanwhile, Florence faces her toughest challenge yet when she is tasked to go undercover with a ruthless criminal organisation, and Selwyn’s world is turned upside down when he encounters a face from his past. Also featuring the return of Officer Dwayne Myers in the show’s first ever feature-length Christmas Special, the eleventh series continues to provide its unique blend of mystery, murder, and sunshine. 3-disc set. 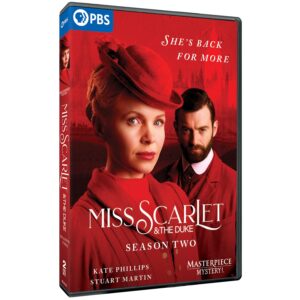 —–It’s a few months after the end of Season One. Eliza Scarlet (Kate Phillips, Peaky Blinders) has solved her father’s murder while her relationship with Inspector William Wellington (Stuart Martin, Jamestown), aka the Duke, continues to slowly simmer. But Eliza continues to face the challenges of being a professional woman in male-dominated Victorian London. 2-disc set.