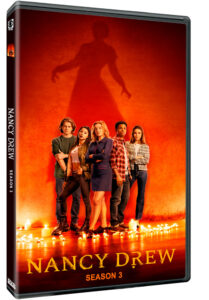 EXTRAS: Deleted Scenes; Gag Reel
—–Season Three of Nancy Drew begins one week after the Season Two finale, when we saw Nancy’s mystical relative Temperance Hudson return to Horseshoe Bay with a dark agenda. Nancy’s hopes of leaving her hometown for college will be derailed by this mysterious nemesis, and her fate will become entwined with that of her greatest foe yet. This season’s adventures will bring Nancy and her friends standalone cases, new love interests, and emotional journeys of self-discovery…culminating in a showdown with Temperance, which results in a shattering turn that will profoundly change all of their lives. This must-have collection comes with all 13 episodes from Season Three. 3-disc set in either format.
.
COMING ON 5/17:
* The Boys – Seasons 1 & 2 Collection (Sony)
$38.99 SRP DVD; $45.99 SRP Blu-ray 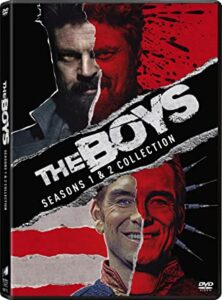 —–The Boys is an irreverent take on what happens when superheroes – who are as popular as celebrities, as influential as politicians, and as revered as Gods – misuse their superpowers, rather than use them for good. It’s the powerless against the super powerful as The Boys embark on a heroic quest to expose the truth about “The Seven,” and their formidable Vought backing. 6-disc set in either format.

EXTRAS: Deleted Scenes; Gag Reel
—–BLOOD & TREASURE is a globe-trotting action-adventure drama about a brilliant antiquities expert and a cunning art thief who team up to catch a ruthless terrorist who funds his attacks through stolen treasure. Danny McNamara is a former FBI agent specializing in stolen arts and antiquities. Lexi Vaziri is a resourceful art thief who is haunted by the tragic loss of her father, which she blames on Danny. When terrorist Karim Farouk absconds with a priceless artifact and kidnaps Danny’s mentor Dr. Ana Castillo, Danny recruits Lexi to help him bring Farouk to justice and rescue Ana. As they chase down Farouk, they encounter unscrupulous individuals who may either be useful allies or dangerous enemies, including Aiden Shaw, an arms dealer who acts solely in his self-interest, and Simon Hardwick, an expert at procuring pilfered artifacts. Danny and Lexi are assisted by Father Chuck, a childhood friend of Danny’s who works at the Vatican Foreign Ministry in Rome. Their hunt draws the attention of Interpol agent Gwen Karlsson, who wants Farouk brought to justice, but won’t allow Danny and Lexi to break international laws in the process. As they crisscross the world hunting their target, Danny and Lexi unexpectedly find themselves at the center of a 2,000-year-old battle for the cradle of civilization. 3-disc set.
NOTE: the DVD format version of this item was released as an MOD (manufactured on demand) title back in September 2020
.
COMING ON 5/31:
* Why Women Kill – Season 2 (CBS/Paramount)
$29.99 SRP DVD MOD

—–From creator Marc Cherry (“Desperate Housewives,” “Devious Maids”), this season of WHY WOMEN KILL features a new ensemble cast, and storylines set in 1949 that will explore what it means to be beautiful, the hidden truth behind the facades people present to the world, the effects of being ignored and overlooked by society, and finally, the lengths one woman will go in order to finally belong. 3-disc set.
.
COMING ON 6/7:
* The Land Before Time – The Complete TV Series (Universal)
$13.99 SRP DVD
—–Take an epic journey back to the past with your favorite prehistoric pals Littlefoot, Ducky, Petrie, Cera and Spike as they welcome new friends Chomper and Ruby in The Land Before Time: The Complete TV Series. The entire family will enjoy their amazing animated adventures as the playful dinosaurs explore their exciting world, discover mysterious secrets, learn valuable life lessons, and laugh their way through fun and friendship across all 26 dino-riffic episodes! 4-disc sets. 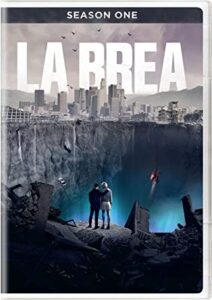 EXTRAS: Inside NBC’s La Brea
—–An epic adventure begins in La Brea: Season One when a massive sinkhole opens in the middle of Los Angeles, pulling hundreds of people and buildings into its depths. Those who fell in find themselves in a mysterious and dangerous primeval land, where they have no choice but to band together to survive. In the search for answers, one family torn apart by this disaster will have to unlock the secrets of this inexplicable event to find a way back to each other. 2-disc set.

—–History’s Greatest Mysteries is a one-hour documentary series that examines the top theories surrounding the world’s most enigmatic unsolved mysteries. Hosted and narrated by Academy Award nominee and Emmy Award winner Laurence Fishburne, each episode unpacks these puzzles with contributions from top historians, authors, scientists, and researchers. From unsolved crimes to lost and buried treasures, and the deaths and disappearances of famous figures, HISTORY’S GREATEST MYSTERIES will explore possible explanations to some of the world’s most confounding events. 4-disc set.
NOTE: attached cover art is a temp image, and is highly subject to change
.
COMING ON 6/21:
* When Calls The Heart – In Like A Lion & Turn Of The Page (Shout!)
$14.98 SRP DVD 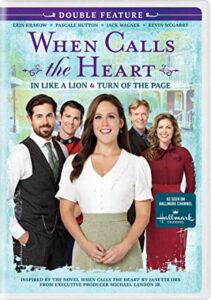 —–In Like A Lion finds Elizabeth returning to her beloved Hope Valley after a month away, and discovering that some surprising changes have occurred in her absence. From a mayoral race to exciting business ventures to old friends in new roles in the community, the one constant for Elizabeth is her budding romance with Lucas Bouchard. Then, in Turn Of The Page, the long-awaited arrival of Elizabeth’s novel should be cause for celebration…but hurt feelings and negative reviews threaten to put a damper on her accomplishment. Single-disc title.
.
COMING ON 6/28:
* Doctor Who – Eve Of The Daleks & Legend Of The Sea Devils (BBC)
$19.98 SRP DVD; $24.98 SRP Blu-ray

—–New Year’s Eve. Sarah (Aisling Bea) is working – again. Nick (Adjani Salmon) is her only customer – again. Same old, same old. Except this year, their countdown to midnight will be the strangest and deadliest they have ever known. Why is an executioner Dalek targeting these two people, in this place, on this night? Why are they having to live through the same moments again, and again, and again? Can the Doctor, Yaz, and Dan save them, and survive into the New Year? Then, Legend of the Sea Devils finds the Doctor (Jodie Whittaker), Yaz (Mandip Gill) and Dan (John Bishop) in 19th century China, where a small coastal village is under threat – from both the fearsome pirate queen Madam Ching (Crystal Yu) and a monstrous alien force which she unwittingly unleashes. Will the Doctor, Yaz and Dan emerge from this swashbuckling battle with the Sea Devils, to save the planet?