Currently in production, the series is set in near-future inland Florida, centering on the Fantasy family who juggle work-life balance among the living and the dead in their family-run funeral home, Tender Endings. The show garnered impressive viewership during its broadcast launch and continues to build its fanbase now that season one is available on HBO Max.

The half-hour series is co-created by The New York Times Editor’s Choice writer Alissa Nutting (Made for Love), and Emmy-nominated producer Alyson Levy (The Shivering Truth). The all-star voice cast returns with Maria Bamford as Trophy, the toxic mother given a second chance at life as well as motherhood, and Jo Firestone as her neglected teen daughter, Euthanasia “Annie.” Tim Robinson reprises his role as the emotionally needy Uncle Pete, and Bebe Neuwirth as Baba, Annie’s “old country” immigrant grandmother and the family matriarch who runs the funeral business and household.

When a bolt of lightning strikes Baba’s embalming fluid and mixes with a tear from Annie, Trophy is accidentally brought back to life with extraordinary zombie-esque superpowers. Shenanigans ensue as Trophy navigates the struggles of parenthood and tries, or hardly tries, to make up for lost time with her daughter.

Set in near-future inland Florida, Teenage Euthanasia centers around the owners of Tender Endings funeral home, the Fantasy Family: Grandma Baba, her adult children Uncle Pete and Trophy, and Trophy’s teenage daughter, Euthanasia (“Annie”), a name accidentally given to her during the time of Trophy’s own unbearable suffering.

Back when Trophy was a teen herself; she ran away from home after giving birth to Annie, leaving her newborn to be raised by Baba and Uncle Pete. Now, fifteen years later, Trophy returns to Tender Endings…as a corpse, for burial. When a bolt of lightning strikes Baba’s homemade embalming fluid and one of Annie’s tears, Trophy comes back from the dead. As a resurrected woman, Trophy has a variety of quasi-useful death powers. But more importantly, she has a second chance at unplanned parenthood.

Adult Swim (AdultSwim.com), launched in 2001, is WarnerMedia’s #1 brand for young adults offering original and acquired animated and live-action series. Airing nightly from 8 p.m. to 6 a.m. (ET/PT) on its linear channel, and also available through HBO Max, Adult Swim is basic cable’s #1 network with persons 18-34 and 18-49, and is seen in 94 million U.S. homes, reaching over 40 million viewers via HBO Max. 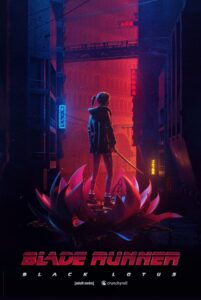 During the Blade Runner: Black Lotus panel, Adult Swim and Crunchyroll shared an exclusive look at the first-ever trailer and never-before-seen key art. Moderated by Jason DeMarco (co-creator of Toonami/senior vice-president and creative director for Adult Swim), viewers heard from the creative team and voice talent as they discussed the new anime series originating from the legendary Blade Runner franchise.

GRAMMY Award-winning singer-songwriter Alessia Cara, whose original song “Feel You Now” is featured in the new Blade Runner: Black Lotus trailer, will also have music featured in the highly-anticipated series.

Check out the thrilling trailer below:

Soaring on Adult Swim this summer, fans joined moderator Adam Conover for a star-studded conversation with Lisa Hanawalt (creator and executive producer) and special guests Raphael Bob-Waksberg (executive producer) and Nicole Byer (voice of Plant Teen 2, The Chill Bird) as they revealed a sneak peek of the next episode of Tuca & Bertie. Check out the hilarious panel below:

Adult Swim (AdultSwim.com), launched in 2001, is WarnerMedia’s #1 brand for young adults offering original and acquired animated and live-action series. Airing nightly from 8 p.m. to 6 a.m. (ET/PT) on its linear channel, and also available through HBO Max, Adult Swim is basic cable’s #1 network with persons 18-34 and 18-49, and is seen in 94 million U.S. homes, reaching over 40 million viewers via HBO Max.

GKYAC’s mission is to be the premiere global provider of kids, family, young adults, and classics content and brands. The group’s programming supplies unique and compelling content for HBO MAX, WarnerMedia’s direct-to-consumer platform. Uniting these award-winning networks and innovative brands helps maximize opportunities and growth potential, both as standalone businesses and as content generators, to drive and support its franchises, cross-studio initiatives as well as ratings.

Warner Bros. GKYAC’s content is currently distributed in 192 countries around the world and the division’s networks are in 500 million homes, delivered through more than 65 channels in 31 languages.

The animated series is co-created by Alissa Nutting, a New York Times Editor’s Choice writer (Made for Love) and Emmy-nominated producer, Alyson Levy (The Shivering Truth). Teenage Euthanasia is currently in production and will premiere in 2021. It is produced by PFFR and animated by Augenblick Studios.

“With Teenage Euthanasia, Alissa and Alyson have created both a world and a family that everyone can relate to, laugh at, and ultimately feel relieved that they aren’t a part of,” said Michael Ouweleen, president of Adult Swim.

As a teen mom, Trophy ran away from home, leaving Annie behind to be raised by her Baba and Uncle Pete. Fifteen years later, Trophy finally returns to Tender Endings…as a corpse, for burial. But when a bolt of lightning strikes Baba’s homemade embalming fluid, and one of Annie’s tears magically bring Trophy back from the dead, Trophy finds herself a resurrected woman with a second chance at unplanned parenthood (and a variety of quasi-useful death powers).

Nutting is a screenwriter, novelist, and essayist. She is also co-creator of the upcoming HBO Max show Made for Love, based on her critically acclaimed book of the same name.

Levy is a co-creator with John Lee and Vernon Chatman of Xavier: Renegade Angel and The Heart, She Holler and a member of PFFR responsible for producing Wonder Showzen, Delocated, Neon Joe Werewolf Hunter, and The Shivering Truth.

Warner Bros. is a global leader in the creation, production, distribution, licensing and marketing of all forms of entertainment across all current and emerging media and platforms. A WarnerMedia company, the Studio is home to one of the most successful collections of brands in the world and stands at the forefront of every aspect of the entertainment industry, from feature film, television and home entertainment production and worldwide distribution to DVD and Blu-ray, digital distribution, animation, comic books, videogames, product and brand licensing, and broadcasting.