Highlights Include House of Hammer, 90 Day: The Single Life, Kiddie Kai, Batali: The Fall of a Superstar Chef and Ghost Adventures

discovery +, the definitive non-fiction subscription streaming service from Warner Bros. Discovery, today announced new and original programming that will be available to stream in September.

Now single, “90 Day Fiance” fan favorites are back and looking to find love once again. Tackling relationship challenges ranging from commitment-phobia to meddling matchmakers to ever-present ex-boyfriends, these six singles are diving back into the world of romance after their failed international relationships.

Over the course of generations, the men in the Hammer family have more secrets and scandals than any vault can contain. Armie Hammer’s alleged crimes are only the tip of the iceberg. Through a trove of archives and interviews from survivors and family members, the dark and twisted secrets of the Hammer family come to light. Behind the money and power lies a dysfunctional dynasty with its male characters exhibiting all the devastating consequences of privilege gone wild.

In the suburbs of Charlotte, North Carolina, there are dojos on every corner. For these families, martial arts is more than an after school activity, it is their way of life. While some seek out pastors, rabbis or priests for guidance, in this community, their sensei’s word is law. But in a town where every Dojo claims to be the best and every parent wants their kid to train with the best sensei, competition is fierce.

Featuring exclusive interviews and shocking revelations, this ground-breaking documentary exposes the disturbing underbelly of the restaurant industry through the dramatic story of Mario Batali, one of the most powerful and popular chefs in America. Behind the charisma and charm lurked a dark side that eventually caught up to him when multiple women came forward with horrific accounts of harassment and their powerlessness in fighting back.

This profile features Joanna Gaines reflecting on her journey to becoming a designer and shares her new plans to restore the historic Cottonland Castle in Waco, Texas.

Jack Osbourne brings his friends, actors Jay Mewes and Jamie Kennedy, to the edge of the unknown in search of the truth behind UFOs. Their first stop: Utah’s Uinta Basin, which has been shrouded in mysteries for centuries, with stories of otherworldly visitors dating back to ancient times.

Additional titles premiering in September include:

Total strangers are given the challenge of surviving the wilderness for 21 days without anything, including their clothes.

Captain Sig Hansen lures his family back to their ancestral homeland in Norway with ambitions of building a greater fishing empire than their forefathers could ever have imagined. But as daughter and co-captain Mandy struggles to start her own family, beginning anew in the land of their ancestors becomes an unexpected journey to rediscover their own heritage and cement the legacy they’ll pass down to the next generation of fishermen.

From pirates and outlaws to Aztec gold and sunken treasure ships, Marty and Rick Lagina dig deep into the many treasure quests across the globe as they reveal amazing new details and clues from past searches that may even advance the hunt.

As India completes 75 years of being a nation, preserving precious traditions while hurtling towards modernity, a set of six films will celebrate the diversity she offers to the world – from faith and spirituality to action packed cinema, from progress in sustainability to intricate craftsmanship, from iconic cuisine to a rapidly growing industry.

For twelve years, dedicated fans have followed the highs and lows between Kody Brown and his four wives – Meri, Janelle, Christine and Robyn – as they’ve expanded their family and celebrated life’s big moments from birthdays to weddings and babies. This season takes a dramatic and emotional turn, as Christine leaves Kody and changes the dynamic of this polygamist family forever

Host John Henson is the caretaker of a haunted hotel and welcomes the competitors to an 8-week stay, unless their baked goods fail to impress the judges, in which case they will have to “check out.” Judges Stephanie Boswell, Carla Hall and Zac Young determine which baker earns the title of Halloween Baking Champion and an all-expense trip to the 10 most haunted hotels in America.

Paranormal investigator Zak Bagans is back for another epic season of “Halloween Wars”as teams of cake, sugar, and pumpkin artists unite to prove their skills. This time, Bagans is introducing the teams to some of the most haunted places in the world to inspire edible Halloween creations that scare even host Eddie Jackson and judges, Shinmin Li and Aarti Sequeira. At stake is the title of Halloween Wars Champion and a trip to one of the most beautiful and haunted cities in the world – Paris, France.

In each episode, one extraordinarily talented and eager chef is challenged to go against the trio of culinary titans handpicked by Bobby Flay himself for a chance to take home $25,000. The stakes couldn’t be higher, as Bobby celebrates and tests the most talented chefs in America. This is Bobby’s game and Bobby’s chefs, and there’s only one rule: it’s all or nothing.

In this six-part spin-off series, we return to Fountain Square, the neighborhood where it all started for Mina and Two Chicks, where Mina is pursuing a passion project: the historic Sanders House. At over 5,000 square-feet, it is four times the size of any renovation Mina has ever done. Now that it is back on the market, she has snapped it up and is committed to returning this historic home to its former glory.

Homeowners decide that their houses don’t fit their lifestyle anymore, but whether they stay or go depends on experts Hilary Farr and David Visentin. Will they love their newly renovated home, or will they list it to buy another?

In December 1985, best-selling author Whitley Strieber was abducted in the middle of the night and subjected to horrific experiments by otherworldly beings. For the first time in 30 years, Strieber returns to the remote cabin where it happened to find out if he can still make contact with the visitors.

Some of the most amazing, eye-opening and downright scary paranormal videos from around the world are featured as a panel of experts break down the footage and analyze what exactly the eyewitnesses captured.

To celebrate, the Ghost Brothers, along with special guests Jason Hawes and Cindy Kaza, are throwing an office Halloween party featuring sneak peeks of the scary-good lineup of shows and specials for Ghostober this year!

Paranormal investigators Zak Bagans and Aaron Goodwin, along with AV techs Billy Tolley and Jay Wasley, travel to haunted destinations where they meet with eyewitnesses and experts to piece together the haunted history of each site.

“Eli Roth Presents: My Possessed Pet” explores the true, terrifying tales of what happens when evil spirits, curses and demons take over family pets and turn them against their terrified owners.

On the Case with Paula Zahn – Debuts Sunday, September 4

ID’s signature newsmagazine, “On the Case with Paula Zahn” celebrates an incredible milestone when its 25th season debuts with the series’ 350th episode on September 4. Led by Emmy(R) Award-winning journalist Paula Zahn, this series features riveting storytelling and original interviews that go beyond the headlines to reveal first-person accounts and expert insights of those connected to the cases, showcasing the full scope and impact of murder.

“Shadows of Death” is the next evolution in true-crime storytelling. Exploring the endless reach of evil, the format explores three lives, impacted by one monstrous crime.

In 1978, four teenagers working at the Burger Chef in Speedway, Indiana are abducted and driven 20 miles away where they are all brutally murdered. The deaths shock the community and baffle police because there is no physical evidence or, it seems at first, no witnesses. A dedicated group of friends, family, and law enforcement remain obsessed with solving this horrendous crime.

A reinvention of the beloved franchise, “Disappeared” returns to shine a light on individuals who vanished seemingly without a trace, and aims to facilitate answers about the missing in order to bring closure to their loved ones.

discovery+ is the definitive non-fiction, real life subscription streaming service from Warner Bros. Discovery. With the largest-ever content offering at launch, discovery+ features a wide range of exclusive, original series across popular passion verticals including lifestyle and relationships; home and food; true crime; paranormal; adventure and natural history; as well as science, tech and the environment, and a slate of high-quality documentaries. For more, visit discoveryplus.com, or find the discovery+ app on most mobile and connected TV devices. 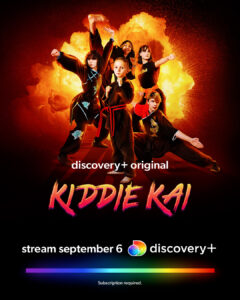 In a region of the southeast United States, lies a legendary martial arts hot spot known simply as The Blackbelt Byway. There are dojos on nearly every corner – welcoming kids of all backgrounds to train to be blackbelts. But in an area where every dojo claims to be the best and every parent wants their kid to train with the top sensei, the competition is fierce. While some of us seek out pastors, rabbis, or priests for guidance, in this community of martial arts families, their instructors’ word is law. For the families whose children participate in martial arts, it’s more than an after-school activity and much more than a sport, it’s a way of life. And for the kids who are inspired to learn the ways of their sensei, it’s a chance to prove to themselves, and to others, that they have the confidence and discipline to be their best selves. And kick some major butt.

In the all-new series KIDDIE KAI, rivalries and long-standing feuds all culminate into epic showdowns. Rivals Sifu Mark Williams, World Champion Mr. John Chung, Shihan Cliff Kinchen, and Sensei Jeff McGregor all made a name for themselves in the 80s and 90s, and now is their chance to prove, once and for all, whether they are still deserving of their titles. From brand new gi to martial arts glory, which dojos will live up to their reputations and create the next generation of champions?

discovery+ is the definitive non-fiction, real life subscription streaming service from Warner Bros. Discovery. With the largest-ever content offering at launch, discovery+ features a wide range of exclusive, original series across popular passion verticals including lifestyle and relationships; home and food; true crime; paranormal; adventure and natural history; as well as science, tech and the environment, and a slate of high-quality documentaries. For more, visit discoveryplus.com, or find the discovery+ app on most mobile and connected TV devices.