“Issa has turned insecurity into an iconic form of comedy,” said Gravitt. “The show is as incisive as it is heartfelt, and it has resonated strongly with its audience because of the deeply personal work that Issa, Prentice, Melina, the cast and the writers have put into it. This talented team has conceived a brilliant final season for INSECURE and we look forward to having many more stories to tell with this singular group of collaborators.”

The series stars Emmy®, Golden Globe and NAACP Image Award nominee Issa Rae who heads the ensemble cast, and the new season will continue to follow our favorite characters as they evaluate their relationships, both new and old, in an effort to figure out who and what comes with them in this next phase of their lives. The fifth and final season is scheduled to begin production later this month and is set to debut later this year.

INSECURE’s fourth season, which debuted on HBO last spring, was acclaimed by critics and fans alike. A.V. Club called it “by far INSECURE’s best season,” Hollywood Reporter praised the season as “funny as ever,” IndieWire hailed the series as “quietly groundbreaking” and Decider highlighted the season as “nimble and introspective.”

The first four seasons of INSECURE are available to stream on HBO Max. 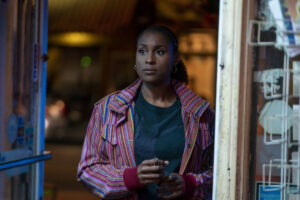 “We’re thrilled that Issa, Prentice, and the whole Insecure team will be getting back together for a fifth season,” said Gravitt. “As we laugh and cringe with recognition, their stories make us all feel a little less alone in the world.”

INSECURE’s ten-episode fourth season debuted April 12 on HBO. The series stars Emmy®, Golden Globe and NAACP nominee Issa Rae (“The Photograph”) who heads the ensemble cast, and continues to follow our favorite characters as they evaluate their relationships, both new and old, in an effort to figure out who and what comes with them in this next phase of their lives. 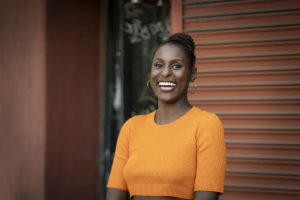 Season 4, Episode 6: “Lowkey Done”
Debut date: SUNDAY, MAY 17 (10:00-10:30 p.m. ET/PT)
In need of some positive vibes after the block party, Issa (Issa Rae) goes out of her way to do good for random people across L.A., eventually turning to an unlikely source for comfort. Meanwhile, Kelli (Natasha Rothwell) urges her friends to reconcile.
Written by Fran Richter; directed by Lacey Duke.

Season 4, Episode 8: “Lowkey Happy”
Debut date: SUNDAY, MAY 31 (10:00-10:30 p.m. ET/PT)
Issa (Issa Rae) and Lawrence (Jay Ellis) catch up and talk life, careers, past mistakes, and what makes each of them happy.
Written by Natasha Rothwell; directed by Ava Berkofsky. 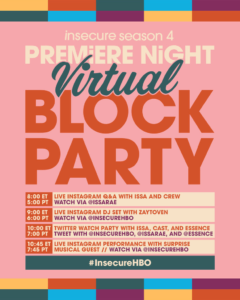 In celebration of the season four premiere of hit comedy INSECURE, HBO will host its fourth annual block party for the series virtually.

Starting on Sunday, April 12 at 8:00PM ET, the four-part VIRTUAL BLOCK PARTY lineup will feature a Q&A with INSECURE creator and star Issa Rae and the cast on her Instagram Live, an Instagram Live DJ set with Zaytoven, and a live Twitter watch party hosted by Rae. Following the season premiere episode at 10:00PM ET, there will be a surprise musical performance on Instagram Live from an artist featured in the upcoming season and on INSECUREⓇ: MUSIC FROM THE HBO ORIGINAL SERIES, SEASON 4 SOUNDTRACK, to be released this summer by Raedio (Rae’s new label) and Atlantic Records.

Music and community have always been central to the series. The annual block parties started as an intimate daylong gathering in Brooklyn, NY for season one, expanded to Inglewood, CA for season two, and culminated with over 2,500 fans attending Insecure Fest at Banc of California Stadium last season. This year’s VIRTUAL BLOCK PARTY moves the event online, with the potential to engage even more passionate Insecure fans.

“INSECURE’s block parties have been a core piece of our marketing campaign and they’ve grown exponentially with each season,” said Jackie Gagne, Vice President, Multicultural Marketing at HBO. “Given the current circumstances, we still wanted to bring together a collective virtual community to celebrate the return of a beloved show on HBO with the hope that we could provide an escape from reality to enjoy great music and good laughs.”

Season four of INSECURE follows the main characters in the aftermath of the decisions they made in the last season. Issa Dee (Rae) pursues a passion project she actually cares about, Molly (Yvonne Orji) navigates a real relationship for the first time, Lawrence (Jay Ellis) figures out what leveling-up means for him, and we see the effect of Tiffany’s (Amanda Seales) new baby on the dynamic of the friend group. Along the way, we’ll see these characters evaluating relationships, both new and old, in an effort to figure out who and what comes with them in this next phase of their lives.

INSECURE season four premieres exclusively on HBO on Sunday, April 12th at 10:00 PM ET/PT and will be available on HBO NOW, HBO GO, HBO On Demand and partners’ streaming platforms.


Glow Up Games® And HBO Present INSECURE®: THE COME UP GAME 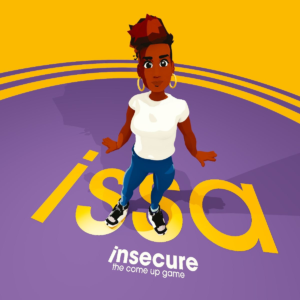 New York, NY, March 23, 2020 – Glow Up Games, a new creative tech studio founded by an all women of color team, announces their premier launch title: a free-to-play mobile game based on HBO’s popular series “Insecure.” Produced in partnership with HBO, INSECURE: THE COME UP GAME takes the world of Issa Dee and her friends and brings the friendships, drama, and misadventures to life. The game will be released this year to tie in with season four of the show, with new features and story content being added monthly.

With THE COME UP GAME, players will find themselves trying to realize their LA dreams, climbing from the club to the boardroom – and reflecting their journey through a rap creation game inspired by Issa’s own mirror rhymes in “Insecure.”

“We could not be more excited to be working on INSECURE: THE COME UP GAME,” said Dr. Mitu Khandaker, CEO of Glow Up Games. “We’ve been inspired by the way that Issa Rae continues to make huge waves in television and media when it comes to telling diverse stories — and we want to bring about the same kind of change for games! As huge fans of the show, we’re excited to help players become a part of Issa’s world — and see themselves represented accurately.”

“THE COME UP GAME is a perfect, natural extension of ‘Insecure.’ I’m so excited to give our viewers a chance to explore Issa Dee’s world,” said ‘Insecure’ star and creator Issa Rae. “The Glow Up Games team has been amazing to work with and it was such a rewarding experience to create this game alongside an all women of color-led team.”

“Throughout the three seasons of ‘Insecure,’ one thing we’ve heard over and over is how fans wish they could be friends with Issa, Molly, Kelli and Tiffany in real life. When Glow Up Games approached us about creating an in-world Insecure mobile game, we jumped on the opportunity,” said Will Price, Director of Licensing and Retail, HBO. “THE COME UP GAME has surpassed our highest expectations and we can’t wait for fans to start playing in their own ‘Insecure’ universe!.”

The initial game release is an addictive rap word game that allows players to take the pen from Issa to create their own rhymes in front of the mirror and share them with friends. After downloading the game, players will receive new updates monthly adding new gameplay features and fresh storylines involving Issa, Molly, Kelli, and Tiffany. Players will pursue new love interests, battle neighborhood adversaries, and navigate messy situations.

Audio Direction for INSECURE: THE COME UP GAME is provided by Sammus (Enongo Lumumba-Kasongo), a rap artist and producer at the intersection of academia and Afrofuturism. The distinctive 3D style of the game is created by Ethan Redd of Virtuoso Neomedia, an independent multimedia artist and game designer.

INSECURE: THE COME UP GAME will be available on the App store and Google Play.

About Insecure: The Come Up Game

Are you ready to run LA?

Hustle, heart and hype are your tools to build your new life in Los Angeles. With Issa and her crew as your guides, players navigate the messy business of adulting – learning to define yourself, take time for self-care, cultivate your crew, and nurture your closest friends.

Features of Insecure: The Come Up Game

Unleash your inner rap star: Connect with your inner Mirror B*tch and hype yourself up for major events with a fast paced rhyme selection mini game.
Design your life: Who will you be? Select from hundreds of options for your personal style (hair, clothes, accessories), your career, and your friend circle.
Run Your City: Unlock dozens of LA locations to experience custom story arcs, exclusive product drops, and special musical cameos.
Impact Your Community: Support your friends, fight gentrification, create the culture – dating is fun, but it’s only a part of your story.

INSECURE: THE COME UP GAME will be available for free on the App Store and Google Play upon release. For more information visit insecurethecomeupgame.com

About Glow Up Games
Glow Up Games is a games and creative technology studio building the future of interactive entertainment. Founded by Mitu Khandaker, Tara Mustapha, and Latoya Peterson, the studio produces beautifully crafted stories through games, mobile, AI, AR/VR and other emerging technologies. For diverse audiences, we create new worlds of possibility.

Glow Up Games is powered by the belief that the games and entertainment industry frequently forget about the power of stories just outside of the mainstream. The three founders have spent more than a decade individually shaping entertainment through innovative applications of technology and distinctive storytelling. By combining talents, they seek to advance the industry by centering overlooked voices and leveraging new technologies to craft more powerful experiences.

About HBO
HBO Licensing & Retail, a division of Home Box Office, Inc., partners with best-in-class licensees around the world to give HBO’s global audience new and exciting ways to engage with their favorite shows. The division leverages iconic, award-winning HBO programs such as Game of Thrones, VEEP, Sex and the City, Silicon Valley, Insecure, The Sopranos, Big Little Lies, True Blood and more to create officially licensed consumer products, innovative merchandise programs, retail activations and live immersive experiences. HBO Licensing & Retail works across a broad range of product categories, including collectibles, apparel, publishing, live branded experiences, digital gaming, fashion and beauty collaborations, luxury accessories, and beyond. Officially licensed HBO merchandise can be purchased in retail stores around the world and online in the US at http://store.hbo.com.


INSECURE: Upcoming Episodes
Returning for its ten-episode, fourth season SUNDAY, APRIL 12 (10:00-10:30 p.m. ET/PT), INSECURE follows our favorite characters as they evaluate their relationships, both new and old, in an effort to figure out who and what comes with them in this next phase of their lives.

The series will also be available on HBO NOW, HBO GO, HBO On Demand and partners’ streaming platforms.