Meet Amy and Lino – a love story for the ages. Inspired by the New York Times Best-Selling Memoir, From Scratch is coming October 21, only on Netflix.
From Scratch

Today, Netflix released the official trailer, key art, and additional imagery for From Scratch. This 8-episode limited series is based on the best-selling memoir From Scratch: A Memoir of Love, Sicily, and Finding Home by Tembi Locke. Attica Locke serves as the showrunner and Hello Sunshine, Cinestar, and 3 Arts Entertainment executive produce.

More information on the series below.

Synopsis: Inspired by the memoir, From Scratch is a cross-cultural love story that follows Amahle “Amy” Wheeler (played by Zoe Saldaña) an American student studying abroad in Italy, as she meets and falls in love with Lino, a Sicilian chef. Their whirlwind romance faces many unforeseen challenges, including their very different cultural backgrounds; true to real life, it is also infused with lightheartedness and moments of humor that exist alongside the more serious ones. But when Lino is faced with unimaginable health challenges and the couple’s future is threatened, the two families come together to create an extended family unlike any they could have imagined, proving that love crosses all borders

· Inspired By: The novel by Tembi Locke


“From Scratch”: Official Date Announcement & First Look & Teaser Art
Inspired by the memoir, the Netflix limited series is a cross-cultural love story that follows Amahle “Amy” Wheeler (Zoe Saldaña) an American student studying abroad in Italy, as she meets and falls in love with Lino (Eugenio Mastrandrea), a Sicilian chef.
[via press release from Netflix] 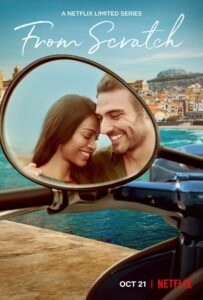 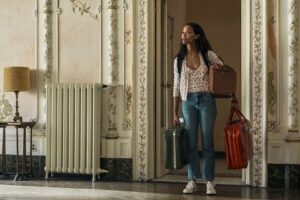 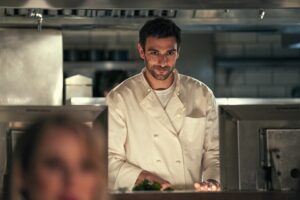 Inspired by the memoir, From Scratch is a cross-cultural love story that follows Amahle “Amy” Wheeler (played by Zoe Saldaña) an American student studying abroad in Italy, as she meets and falls in love with Lino, a Sicilian chef. Their whirlwind romance faces many unforeseen challenges, including their very different cultural backgrounds. But when Lino is faced with unimaginable health challenges and the couple’s future is threatened, the two families come together to create an extended family unlike any they could have imagined, proving that love crosses all borders.

New York (October 7, 2021) – As a big-city dweller feeling disconnected from the food he eats, David Moscow will continue to show audiences what it takes – really takes – as he creates more fascinating meals in Season 2 of “From Scratch,” which will premiere on Sundays at 10:00pmET on FYI (www.fyi.tv) starting October 31st. A special preview episode can be seen Sunday October 30th at 9:00amET as part of the Outdoors daytime programming block on The HISTORY Channel (www.history.com).

“From Scratch” follows actor/producer/adventurer David Moscow on a worldwide expedition making meals literally from scratch. After being presented a recipe from a chef, David must hunt, dive, gather, forage and grow each ingredient to remake the meal, revealing the overwhelming amount of work, craftmanship and passion that brings everyday ingredients into the kitchen. “From Scratch” highlights the fragility of our environment and food supplies as global climate changes and species face pollution, habitat destruction, overfishing, monoculture and other threats. Moscow’s travels have given him the opportunity to meet and work with people creating sustainable alternatives against high odds.

Season 2 will find Moscow and his crew navigating new territory while traveling and filming during a global pandemic, arriving in a country during a parliamentary coup and the aftereffects of a hurricane. Mosow will visit Utah, Wyoming, Washington State, Malta, Kenya, Croatia, Costa Rica and Peru and will make dishes with the help from the Massai, the Dene (Navajo), at the 6th best restaurant in the world and with one of the top food trucks in American which is run by a Native American woman.

Since making his feature film debut in Big, David Moscow has gone on to work as a producer and actor, appearing in films, on television and on stage. His film credits include Newsies with Christian Bale, Honey opposite Jessica Alba and roles in Just Married and Riding in Cars with Boys, among others. He has starred on several network television series including “Zoe, Duncan, Jack & Jane,” and has guested on numerous shows including “Seinfeld.” He co-developed and co-produced Lin-Manuel Miranda’s first stage production of In the Heights. As a producer his films include Hellbenders, Under the Silver Lake, Wild Nights With Emily, Easy Living, Thirst Street and Desolation, which marked his directorial debut.

FYI,TM is home to lifestyle content that inspires the ‘enthusiast’ in us all by highlighting those who live life to the fullest and pursue their passions. Bringing together in one place a range of genres and lifestyle programming -from cars to all things home, the great outdoors to the amazing stories behind collectibles, and much more -FYI takes viewers inside the worlds of passionate enthusiasts who live their lives on their own terms. FYI is part of the A+E Networks portfolio. For more information, visit https://www.aenetworks.com/brands/fyi


Revealing the Cast That Will Bring ‘From Scratch’ to Screen

It’s an honor to revisit From Scratch for the screen. In many ways, it feels like a cinematic love letter – and the perfect next step of this story. Long before I wrote the book about my experience with love and loss after the death of my husband, I spent years replaying the memories in my mind. There is no better person to take on this journey than my creative partner, showrunner, and family member – my sister, Attica Locke. She knows the story like no one else. For us, this is life and art colliding to allow the personal to become the universal.

Having Zoe Saldana sign on to From Scratch was quite literally dream casting. We knew casting certain characters would be a challenge, particularly the lead role of Lino, based on my late husband. Attica called me after she first saw one actor’s audition. She had a visceral reaction and told me we should sit on the phone together as I watched. From that phone call we knew. Here was someone we didn’t know but who felt like family. Every member of our cast feels like that.

After more than a year of isolation, separation, and loss, and it is beautiful and even fortuitous to share a story that embraces the richness of nature, food, love, and travel – the things we have all been denied. I hope the series will nourish our souls, inspire creativity, and, of course, remind us of the magical ways food can express love.

There could be no more perfect home for From Scratch than Netflix. Stretching across multiple languages, many cultures, and two continents, our show is about how love and our shared humanity can cross borders. It’s exciting to know that this series, which highlights the universal things that unite us no matter where we are on the planet, will be streamed all over the planet.

Zoe Saldana (Guardians of the Galaxy, Avatar) plays Amy Wheeler, a young woman from Texas who arrives wide-eyed in Italy, searching for a life full of beauty and adventure. An unexpected romance with a charming Sicilian, Lino, teaches her to live a life full of love and passion for romance, art, and food.

Eugenio Mastrandrea (La Fuggitiva, The Girl from last century) plays Lino, a Sicilian chef who grew up translating literature at night, after spending days picking garlic and olives with his father in the fields of Sicily and learning to cook at his mother’s stove. Lino broke 100 years of tradition by leaving the fields of Sicily to become a chef. It’s through the love of his wife that he’s able to fulfill his dream of dreams before the end of his life.

Danielle Deadwyler (Watchmen, The Harder They Fall) plays Zora, Amy’s older sister and best friend. Although she sometimes resents her baby sister for getting their parents to go along with her rule-breaking she also lovingly cheers her on. With wry humor, she is Amy’s fiercest ally in the family.

Keith David (Greenleaf, Welcome to the Blumhouse) plays Hershel, former civil rights activist, and Amy’s father. Hershel is a plainspoken man who lets his kids make their own decisions but doesn’t bullshit them if he thinks they’re about to make a mistake. He raised two headstrong young women. Though happily remarried, his divorce from Amy’s mom is a wound he still carries.

Kellita Smith (The Bernie Mac Show, Z Nation) plays Lynn, Amy’s bitingly funny mother full of judgment about almost every aspect of her daughter’s life. Lynn gave Hershel custody of the girls after they divorced and has spent the last decade feeling guilty and regretting this decision.

Judith Scott (Dear White People, Snowfall) plays Maxine, Herschel’s wife, and Amy’s stepmother. Maxine practically raised Amy and Zora during their teen years, and her commitment to them is unwavering.

Lucia Sardo (Nastro d’Argento, Picciridda) plays Filomena, Lino’s mother. Filomena is deeply bound by Sicily’s Old World culture but is adept at finding clever ways to work around the patriarchal hierarchy of her country and her marriage.

Paride Benassai (Felicia Impastato, La Fuitina Sbagliata) plays Giacomo, Lino’s father. This man with a grade school education devoted his life to garlic and olive farming and provided for his family; he is a proud patriarch who disapproves of his son not taking over the family business.

Roberta Rigano (I Know This Much Is True) plays Lino’s sister, Biagia. She feels abandoned by Lino but also proud of his accomplishments by leaving home. She is also hurt and angry with herself for all the ways acquiescing to the patriarchal order cost her joy and a different life she could have had.