—–SUPER PUMPED: THE BATTLE FOR UBER is the first installment of the SUPER PUMPED anthology series, in which each season will explore a story that rocked the business world to its core and changed culture. Joseph Gordon-Levitt; Kyle Chandler; Uma Thurman; Kerry Bishe; Babak Tafti; Jon Bass; Bridget Gao Hollitt; Elisabeth Shue. 3-disc set in either format.

COMING ON 10/11:
• Blood & Treasure – Season 2 (CBS/Paramount)
$34.99 SRP DVD MOD; $39.99 SRP Blu-ray MOD
(as of this writing, this title is not yet available for pre-order)
EXTRAS: Gag Reel
—–The globe-trotting action-adventure drama BLOOD & TREASURE is back with a new season! Follow a brilliant antiquities expert and a cunning art thief, who team up to catch a ruthless terrorist who funds his attacks through stolen treasure. 4-disc set on DVD format; 3-disc set on Blu-ray format. 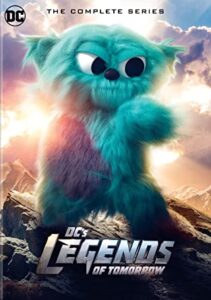 EXTRAS: over 7 hours of Featurettes, Unaired Scenes, Gag Reels, and More! Blu-ray only: Digital Copy
—–When heroes alone are not enough…the world needs Legends! DC’s Legends of Tomorrow follows a ragtag group of misfit heroes charged with protecting time itself: the past, present and future. The crew aboard their timeship, the Waverider, includes Sara Lance, Mick Rory, Nate Heywood, Ray Palmer, Nora Darhk, Zari & Behrad Tarazi, Ava Sharpe, Vixen, John Constantine, Firestorm, Rip Hunter, Captain Cold, Astra Logue, Gideon, and many more heroes and rogues. Their responsibility takes them across history, bringing them up against bizarre threats unlike any humanity has ever known. Screwing up history for the better, the Legends fight, talk, and sing their way through protecting the timeline from aberrations, anomalies, and anything else that threatens to mess with history. Some problems can only be fixed by Legends. 24-disc set on DVD format; 19-disc set on Blu-ray format.

—–For six electrifying seasons, no crime series proved more combustible than the Peabody Award-winning Justified. At the explosive center of the action: Western-style, gun-slinging U.S. Marshal Raylan Givens (Timothy Olyphant) confronts murder, drugs, bank heists, mobsters, crime families, corrupt politicians and even his own tumultuous past – and never backs down. His ultimate adversary is the cunning, complex outlaw Boyd Crowder (Walter Goggins), but the real wild card is Ava Crowder (Joelle Carter), the mysterious woman torn between the two men and both sides of the law. From creator Graham Yost and based on legendary author Elmore Leonard’s crime novella “Fire in the Hole,” it all leads to a perfectly unexpected final showdown. 19-disc set.
NOTE: in 2015 this title came out in a Limited Edition with a 38-Page Commemorative Disc Book, and a hip flask with a Justified logo: that package is out of print and will be replaced with this new package…just in time for fans who don’t own it on Blu-ray yet to get it and re-watch the show while the team produces a follow-up limited series, “Justified: City Primeval”! Keep in mind that the price for this Blu-ray re-release hasn’t been disclosed yet, and the artwork shown – based on the 2015 release – may not be finalized yet, and could be subject to change. 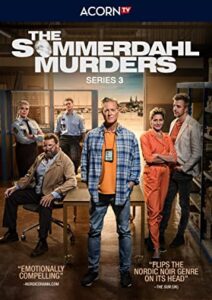 —–DCI Dan Sommerdahl (Peter Mygind, Borgen) has devoted his life to his police career, ultimately at the cost of his marriage. As Dan seeks to move forward, can he learn to accept that his ex-wife, criminal technician Marianne (Laura Drasbæk, Forbrydelsen), is now in a relationship with Detective Flemming Torp (André Babikian, The Protectors)…who is not only Dan’s partner on the force, but also his best friend? Since the trio are still solving crimes together in their seaside Danish town, they try to keep their professional actions separate from their personal affairs. There is much to investigate: a man pushed to his death from an apartment building, the killing of a real-estate developer, a nun’s murder, and the fatal car crash of a wealthy widow. But it’s not long before strife breaks out between the detectives, throwing their partnership and decades of friendship into doubt. 2-disc set. 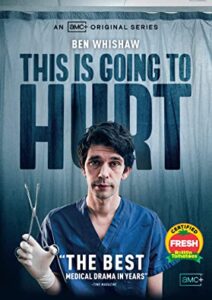 —–Ben Whishaw (Skyfall) stars in this hilarious – and often heartbreaking – journey of Adam, a young doctor stuck in a system that sometimes feels like it’s against him. The unvarnished realities of Adam’s life are revealed: the 97-hour weeks, life-and-death decisions, a tsunami of bodily fluids, and a personal life forced into second place. All for an hourly rate that struggles to compete with the hospital parking meter. It’s a stark reminder of the vital role played by doctors like Adam everywhere. 2-disc set.

COMING ON 10/25:
• Good Sam – The Complete Series (CBS/Paramount)
$24.99 SRP DVD MOD
(as of this writing, this title is not yet available for pre-order)
EXTRAS: Gag Reel; Deleted Scenes
—–GOOD SAM stars Sophia Bush in a drama about Dr. Sam Griffith, a gifted heart surgeon who excels in her new leadership role as chief of surgery after her renowned boss falls into a coma. When her former boss wakes up months later demanding to resume his duties, Sam is tasked with supervising this egotistical expert with a scalpel who never acknowledged her stellar talent. Complicating matters, the caustic and arrogant Dr. Rob “Griff” Griffith (Jason Isaac) also happens to be her father! As Griff defies Sam’s authority and challenges her medical expertise, the big question becomes whether this father and daughter will ever be able to mend their own relationship as expertly as they heal the hearts of their patients. This 3-disc collection includes all 12 episodes.

COMING ON 11/8:
• Frasier – The Complete Series (CBS/Paramount)
$129.99 SRP Blu-ray MOD
(as of this writing, this title is not yet available for pre-order)
EXTRAS: Observations, Analyses and Good-Byes; Frasier Says Farewell; Behind The Couch: The Making Of Frasier; Frasier Crane’s Apartment; Season One Celebrity Voices; and more featurettes
—–EVERY HILARIOUS EPISODE ON 33 BLU DISCS. The doctor is in! Frasier: The Complete Series includes all eleven seasons of the award-winning spinoff from Cheers. Kelsey Grammer reprises his Emmy Award-winning role as Dr. Frasier Crane, a stuffy psychiatrist turned call-in radio host who struggles to follow his own advice. Frasier features an amazing ensemble cast, including John Mahoney as Martin, Frasier’s gruff, ex-cop father, Jane Leeves as Daphne, the eccentric British housekeeper, and David Hyde Pierce in his Emmy Award-winning role as Dr. Niles Crane, Frasier’s neurotic brother. Enjoy the show’s most memorable moments like an uncomfortable visit from Sam ‘Mayday’ Malone (Ted Danson reprising his role from Cheers) in “The Show Where Sam Shows Up,” Niles defending his adulterous wife’s honor in a fencing duel in “An Affair to Forget” and the emotional series finale, “Goodnight, Seattle.” Frasier: The Complete Series features over 250 hilarious episodes.
NOTE: this title has been available on DVD format since 2015, but is being released on Blu-ray format for the first time ever, via the MOD (Manufacture On Demand) online retail distribution system 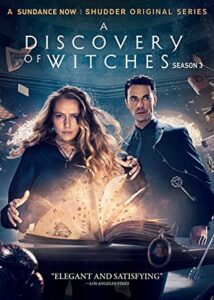 —–In the final season of A Discovery of Witches, Matthew and Diana return from their trip to 1590 to find tragedy has occurred at Sept-Tours. They must locate the missing pages from the Book of Life – and the Book itself – before it’s too late. But their enemies are gearing up against them, and a monster from Matthew’s past has been lying in wait to return for revenge. 2-disc set in either format.
NOTE: the Amazon listing above for the DVD version INCORRECTLY shows it as “Region 2” (Europe), but the listing correctly shows the NORTH AMERICAN code for the UPC of the DVD version of this title…it should be safe to pre-order. Our thanks to reader Bob Corrigan for the email about it. If you don’t trust the situation (and we would understand if you don’t!), then feel free to pre-order from another seller:
https://www.deepdiscount.com/discovery-of-witches-season-3-a-discovery-of-witches-series-3/014381135640

—–BEFORE MIGHTY MORPHIN POWER RANGERS, THERE WAS SUPER SENTAI! See where the worldwide phenomenon began with the original Japanese series that inspired the Power Rangers franchise! The meteorite believed to have once killed off the dinosaurs actually rattled the Earth into two parallel universes – Another Earth and Dino Earth, where dinosaurs continued to thrive. Now they have evolved into the Saurians, a race of humanoid dinosaurs, and the Bakuryū, a race of mechanized dinosaurs. But the wall between our universes has been breached. The Evolians that have been at war with the Saurians and Bakuryū have invaded, and it’s up to the Abarangers to protect the world! INCLUDES ALL 50 EPISODES! 8-disc set.
NOTE: Japanese soundtrack; English subtitles. Exclusively available via Shout Factory’s online store months before it’s available anywhere else. 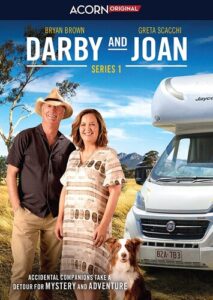 —–Newly widowed nurse Joan Kirkhope (Emmy winner Greta Scacchi, Rasputin, War & Peace) is on a quest to find answers about her husband’s perplexing death. Ex-detective Jack Darby (Emmy nominee Bryan Brown, The Thorn Birds, Cocktail) has taken to the open road to escape his past. When their vehicles collide on a remote road in the Australian outback, these strangers are thrown together for an unexpected adventure. The two couldn’t be more different: a down-to-earth Aussie and a tightly wound Englishwoman. But as they’re drawn into a string of intriguing mysteries lurking in the isolated, tropical corners of a vast continent, it quickly becomes clear that the most fascinating puzzle they face is each other. 2-disc set. 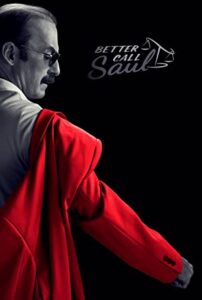 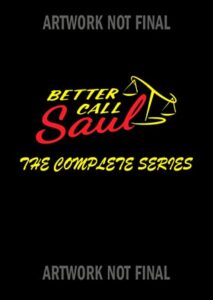 —–Before Saul Goodman met Walter White, he was struggling attorney Jimmy McGill (Bob Odenkirk). In this prequel to the Emmy-winning series Breaking Bad, Jimmy teams up with Mike Ehrmantraut (Jonathan Banks) and begins his transformation from optimistic underdog into Albuquerque’s most notorious legal legend. Michael McKean co-stars as Jimmy’s brilliant, uncompromising brother, Chuck. 19-disc set.
NOTE: as of today’s writing, this title has only been announced for Blu-ray format

NEW YORK, N.Y. – Feb. 24, 2021 – Frasier’s back – and he’s more exactly the same than ever. Paramount+, the highly anticipated streaming service from ViacomCBS, today announced that Kelsey Grammer will reprise his celebrated role as Dr. Frasier Crane in the new original comedy series FRASIER. Grammer will executive produce along with writers Chris Harris (“How I Met Your Mother,” “The Great Indoors”) and Joe Cristalli (“Life in Pieces,” “Perfect Harmony”), and Grammnet Productions Tom Russo and Jordan McMahon. The series will be produced by CBS Studios in association with Grammnet Productions, exclusively for Paramount+.

“Having spent over 20 years of my creative life on the Paramount lot, both producing shows and performing in several, I’d like to congratulate Paramount+ on its entry into the streaming world,” said Grammer. “I gleefully anticipate sharing the next chapter in the continuing journey of Dr. Frasier Crane.”

“FRASIER is one of the most acclaimed comedies in modern television history and truly defines premium storytelling,” said David Stapf President of CBS Studios. “There has long been a call from fans for its return, and that call is now answered thanks to the amazing Kelsey Grammer reprising his iconic role of Dr. Frasier Crane and a brilliant creative plan from Joe, Chris and Kelsey. We can’t wait to reveal its next chapter on Paramount +.”

With over 6,000 episodes available, comedy is central to Paramount+. The service delivers never-ending laughs with beloved sitcoms, including “Frasier,” “I Love Lucy,” “Everybody Hates Chris,” “Strangers with Candy,” and “Cheers,” and is introducing a new generation to the funniest families in television, including “Family Ties,” “The Brady Bunch,” YOUNG SHELDON, MOM and many more.

ViacomCBS’ existing subscription video-on-demand and live streaming service, CBS All Access, will be rebranded as Paramount+ on March 4, 2021 as part of the service’s expansion to feature content from ViacomCBS’ leading portfolio of broadcast, news, sports and entertainment brands. ViacomCBS will also bring Paramount+ to international markets with an initial debut in Australia, Latin America and the Nordics in 2021.

CBS Studios is one of the industry’s leading suppliers of programming with more than 70 series currently in production across broadcast and cable networks, streaming services and other emerging platforms. The Studio’s expansive portfolio spans a diverse slate of commercially successful and critically acclaimed scripted programming, genre-defining franchises including the ever-growing “Star Trek” universe, award-winning late night and daytime talk shows, and an extensive library of iconic intellectual property.