EDDIE PEPITONE FOR THE MASSES 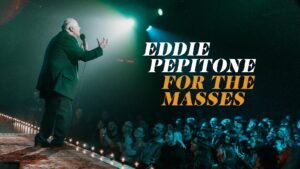 “Eddie Pepitone is an extraordinary hybrid. The comedic content of George Carlin and the vocal volume of Ethel Merman. Brace yourself.”- Robin Williams

“A comic’s comic and a true American original”- AV Club

New York, NY- May 27, 2020- Eddie Pepitone is back with a brand new hour of comedy in his June 23 special and album, For The Masses, which will be available almost everywhere comedy is streamed and sold.

They call him the Bitter Buddha, comedian Eddie Pepitone is a master of the dark art of comedy. Brooklyn-Born, but a father-figure to the L.A. alt-comedy scene, Eddie Pepitone is a ranting absurdist and self-deprecating rage machine. Eddie delivers equal rancor to global threats and the tiniest of inconveniences, as exemplified by his bit wherein he satirically berates his on-screen wife for keeping his shirts smelling fresh while the world is crumbling around us. His random non-sequiturs are a refreshing antidote to stand-up’s standard observations, and his vocal volume goes from a low growl to a spitting yell in the span of a single joke. Sweet at his core, he’s developed an onstage character prone to overreactions and a hair-trigger temper. It’s as if he’s suffering from PTSD, with all of pop culture his personal Vietnam.

With a loyal following from his appearances on Marc Maron’s WTF podcast, his recurring role as a heckler in the audience of Late Night with Conan O’Brien, and his 2013 Feature Documentary The Bitter Buddha, learn what comedy fans already know- Eddie Pepitone is a one-of-a kind voice in these times.

Hailed as a modern day cross between Jackie Gleason, Don Rickles and Eckart Tolle. Eddie is a force of nature on stage, switching between social rage and self-doubt. His shows are an energetic combo of calm and chaos, blue-collar angst and sardonic enlightenment. Few comedians working today channel the power of the rant better than Eddie Pepitone.

In addition to his regular stand-up shows, Eddie is a stand-out comic/character actor. He has appeared on numerous comedy TV shows, including It’s Always Sunny in Philadelphia, The Sarah Silverman Program, Jimmy Kimmel Live, Chappelle’s Show, appearances on Bob’s Burgers, and he’s a regular on Adult Swim’s Your Pretty Face is Going to Hell. A Feature Documentary about his life, The Bitter Buddha, was released in theaters and on-demand in 2013. In 2014, his first comedy special In Ruins premiered on Netflix.
Eddie Pepitone can frequently be found on his must-follow Twitter & Instagram, and hosting the popular comedy podcast Pep Talks.

Filmed at the Dynasty Typewriter in Los Angeles, For The Masses was Directed by Steven Feinartz.

About Steven Feinartz:
Steven Feinartz directed the feature documentary, The Bitter Buddha, in 2013. Since then, he’s produced and directed many comedy specials and series for Netflix, Comedy Central, and Showtime; which include Matt Braunger: Big Dumb Animal, SXSW Comedy with Natasha Leggero, and the Comedy Central Series Bill Burr Presents: The Ringers. He directed the Trump vs Bernie Sketch Comedy Specials for Fusion, and Co-Created and Directed the Facebook Watch series Please Understand Me which was Executive Produced by Sarah Silverman.

For The Masses will be released on June 23, 2020 on the following platforms: