—–Officer Tom Hanson (Johnny Depp) leads his band of agents in the special Jump Street division by going undercover to infiltrate local schools, to put a stop to crime and keep students safe from corrupt influences. The 21 Jump Street team is a mixed group, including the wise-cracking Officer HT Ioki (Dustin Nguyen), the brilliant Officer Judy Hoffs (Holly Robinson Peete), the streetwise Officer Doug Penhall (Peter DeLuise), and the hard-nosed Captain Adam Fuller (Steven Williams). This landmark television program co-created by Patrick Hasburgh and Stephen J. Cannell (THE A-TEAM, THE ROCKFORD FILES) not only served as the springboard for Johnny Depp’s career, but also dealt with timely social issues including alcoholism, hate crime, drugs, racism, AIDS, abuse and promiscuity. Each episode resolves with moral lessons being learned and justice being served. The smash TV series comes with all 5 seasons.
NOTE: this title was released in 2010 by Mill Creek Entertainment, but that DVD has gone out of print; VEI is putting out this new version for fans who missed buying it
.
COMING ON 8/9:
* Amazing Race – The 7th Season (CBS/Paramount)
$29.99 SRP DVD MOD 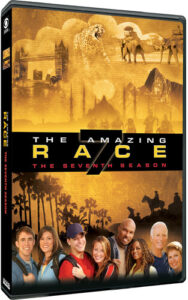 EXTRAS: All Access Pass; Commentaries; Featurette
—–Get ready for the adventure of a lifetime with all twelve episodes of THE AMAZING RACE SEASON 7 on DVD! Eleven new passport-winning teams are ready to tackle the unusual and extreme on their way to the finish line and a million-dollar prize. Setting the pace for the adrenaline-racing journey are TV’s favorite reality couple, Rob and Amber, and a panorama of breathtaking sights from Buenos Aires to Botswana. With special features, and gripping audio commentaries from the team members themselves, this must-own 4-disc collection is your international passport to excitement. Join the globe-trotting phenomenon that has won the Emmy for Best Reality-Competition Program. 4-disc set.
NOTE: this title was originally released to stores on DVD in 2005, but has since gone out-of-print; the studio is re-releasing the DVD as a Manufacture On Demand (MOD) item for fans who missed buying it…why this particular season? The studio hasn’t explained, but it IS interesting for us to note that one of this season’s contestants – Joyce – previously played a recurring role (“Ensign Gates”) on Star Trek: The Next Generation, which is ALSO on today’s Roundup (see below). But that’s probably a coincidence.
.
COMING ON 8/30:
* The Good Witch – The Complete Series (Cinedigm)
$99.99 SRP Blu-ray MOD 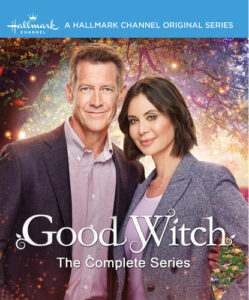 —–The Good Witch takes viewers on a magical journey with Cassie Nightingale and her daughter Grace. When Dr. Sam Radford moves in next door to Grey House with his son, they are charmed by the ‘magical’ mother-daughter duo. 14-disc set.
NOTE: this title was released on DVD format earlier this year, in March; now the item is being made available in Blu-ray Disc format via Manufacture On Demand (MOD) online sellers
.
COMING ON 9/13:
* Cobra Kai – Season 4 (Sony)
$30.99 SRP DVD 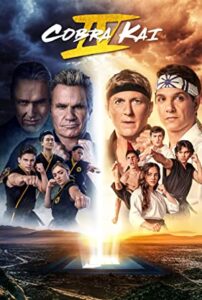 —–The battle for the soul of the Valley reawakens. New alliances. Faced with a common enemy, Daniel (Ralph Macchio) and Johnny (William Zabka) decide to start working together, while Kreese (Martin Kove) looks to the past for a new ally of his own. Terry Silver returns to the dojo. Have patience: he’s just getting everything rolling. Higher-than-ever stakes. Who will take it all at the All Valley Tournament? Legends will be born in Cobra Kai Season 4. 2-disc set.
.
COMING ON 9/20:
* Legacies – The 4th and Final Season (Warner)
$29.99 SRP DVD 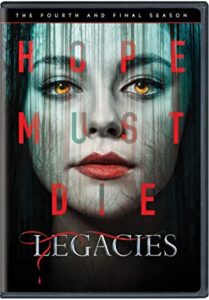 —–As Season 4 begins, Hope must choose between saving the boy she loves and ending Malivore’s threat once and for all. This choice will have life-changing consequences for Alaric Saltzman and the Super Squad. Working together, these young and powerful vampires, witches and werewolves will face their darkest and most deadly threat of all and The Salvatore School will be torn apart in the process. 4-disc set.

—–Restored and meticulously remastered in brilliant high definition, Star Trek: The Next Generation is a true milestone in TV history. With such thought-provoking episodes as “The Measure of a Man” and “The Inner Light,” the return of the Borg in “The Best of Both Worlds,” and the time-shattering confrontation between Captain Jean-Luc Picard (Patrick Stewart) and the mysterious god-like Q in the Hugo Award-winning series finale. Enjoy every memorable moment from the series that re-launched the Star Trek legacy for new “generations” to enjoy and experience! 41-disc set.
NOTE: this title was originally released on Blu-ray format in 2016, but had been discontinued; now the same studio is offering it again for fans who missed buying it
.
COMING ON 9/27:
* Superman & Lois – The Complete 2nd Season (Warner)
$19.99 SRP DVD; $24.99 SRP Blu-ray
(as of this writing, this title is not yet available for pre-order)
EXTRAS: Fractured: The Heart of Bizarro; The DC Heroes: Path to Glory; Digital Copy (Blu-ray Disc only)
—–Season Two of Superman & Lois opens with the dust still settling in Smallville following the shocking outcome of last season’s confrontation between Morgan Edge and Superman. With Smallville on the national map for the first time in the town’s history, Lois Lane faces fresh challenges in her latest journalistic endeavors, while Jordan and Jonathan also find themselves dealing with change. Featuring all 15 action-packed episodes from the exciting second season, Superman & Lois stars Tyler Hoechlin (Supergirl, Arrow), Elizabeth Tulloch (Supergirl, Grimm), Jordan Elsass (Little Fires Everywhere), Alex Garfin (New Amsterdam), Erik Valdez (Graceland), Inde Navarrette (13 Reasons Why), Wolé Parks (All American), Tayler Buck (Tyler Perry’s Assisted Living), Sofia Hasmik (All the Bright Places), with Dylan Walsh (Blue Bloods) and Emmanuelle Chriqui (Entourage). 3-disc set in either format.
.
COMING ON 10/4:
* Walker – Season 2 (CBS/Paramount)
$31.99 SRP DVD 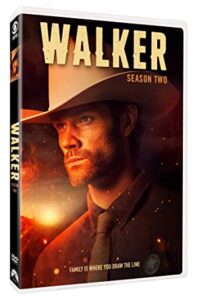 EXTRAS: Gag Reel; Deleted Scenes
—–Texas Ranger Cordell Walker (Jared Padalecki) is more determined than ever to protect his family and find out the truth about his wife’s death. Micki (Lindsey Morgan) goes on a secret ops mission to stop the Del Rio crime syndicate, but she realizes it could take a toll on her relationship with Trey (Jeff Pierre). The return of the Davison family ignites an old feud with the Walkers, and Liam (Keegan Allen) doesn’t trust the new DA. This 5-disc set is packed with all 20 intense episodes from Season 2.
NOTE: as of today’s writing, this title has only been announced for DVD format 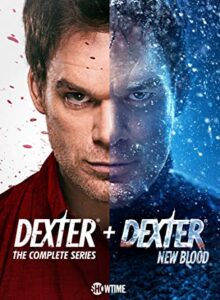 EXTRAS: Contains over 3 hours of exclusive special features
—–DEXTER (ORIGINAL SERIES) – All eight seasons of the award-winning television series are now available in this one-of-a-kind collection! Starring Michael C. Hall in his Golden Globe-winning role as Dexter Morgan, a serial killer with his own twisted sense of justice. Don’t miss a single thrilling episode of the shocking drama that broke all the rules and changed television forever! DEXTER: NEW BLOOD – Michael C. Hall returns to his Golden Globe-winning role as Dexter Morgan. The world at large believes Dexter died in a tragic boating accident…and in a way the world at large isn’t wrong. Far from the life he knew, living under a false name in the small town of Iron Lake, NY, he’s successfully tamped down his Dark Passenger for nearly 10 years. With a normal job and a Chief of Police girlfriend, it seems he’s got life under control – until his son shows up and turns his world upside down. Rattled, Dexter yields to his homicidal urges, and soon finds himself on a collision course with a very dangerous local. Jennifer Carpenter and Golden Globe winner John Lithgow also return to reprise their iconic roles as Debra Morgan and the infamous Trinity Killer. 36 discs in DVD format and 28 discs in Blu-ray format. 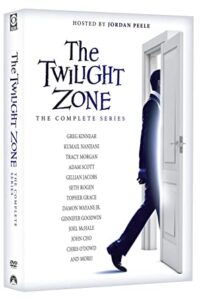 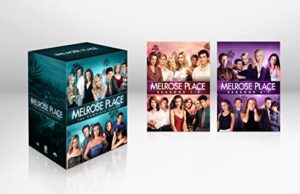 EXTRAS: a ton of special features!
—–For the first time ever, MELROSE PLACE – the highly successful and steamy spin-off of Beverly Hills 90210 – comes together in one Complete Series set! This sudsy drama focuses on the lives and loves of young adults in an apartment complex in Los Angeles. From the complicated scheming of scandals, to the murderous plots of lovers, the residents at Melrose Place are more messed up than average folk. Includes every episode from 7 seasons on 54 discs! 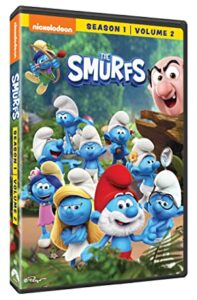 —–The Smurfs Season One adventures continue as Blossom and Brainy are transported to an alternate universe, Papa Smurf holds a vote to see who will act as Rescue Smurf, Gargamel tries to transform into a Smurf, Dreamer becomes a knight, and so much more! This magical volume contains episodes 10-18 of Season One! Single-disc title.

Peacock, NBCUniversal’s new streaming service, has officially launched and is home to thousands of hours of premium content, including curated channels from FilmRise. Fans of a lean-back viewing experience will gravitate toward channels, which is a traditional-looking grid full of content aggregated in a modern way to showcase live events, linear feeds and 24/7 playlists.

Below, please find a rundown of the FilmRise offerings, streaming free for all Peacock users:

Gordon Ramsay hosts a fiery cooking competition in which the winner receives a head chef position.

Retracing the steps of real investigations with interviews and dramatic re-creations as experts draw on forensic science to solve baffling crimes and other mysteries.

While on a road trip through a desert, mild-mannered high school teacher Ralph Hinkley is greeted by extraterrestrials who present him with an extraordinary red flying suit that imbues him with uncanny powers. With William Katt, Connie Sellecca, Robert Culp.

Chef Gordon Ramsay tries to turn around restaurants in crisis.