Check out the official Hulu trailer for RUN. The Original Film will premiere on Friday, November 20, only on Hulu.

Synopsis: They say you can never escape a mother’s love… but for Chloe, that’s not a comfort — it’s a threat. There’s something unnatural, even sinister about the relationship between Chloe (newcomer Kiera Allen) and her mom, Diane (Sarah Paulson). Diane has raised her daughter in total isolation, controlling every move she’s made since birth, and there are secrets that Chloe’s only beginning to grasp. From the visionary writers, producers and director of the breakout film Searching, comes a suspense thriller that shows that when mom gets a little too close, you need to RUN.

− Premium streaming service to become U.S. home to Seasons 1 and 2 of hit comedy from Project 10 Productions and SEVEN24 Films –

“JANN blew everyone out of the water, establishing Jann Arden as a comic force on television.” – TV, eh?

“JANN is the real deal: a funny, biting satire about the entertainment industry that isn’t afraid to make fun of its star.” – NOW Magazine

“Arden aces it. She is fearless, a born comedienne, as in on the joke as a Second City veteran.” – Bill Brioux

“Jann has done such an incredible job bringing this character to life, and the series is enjoyed by viewers across Canada,” said Randy Lennox, President, Bell Media. “Along with our partners at Project 10 Productions and SEVEN24 Films, we’re absolutely thrilled to introduce JANN, and the hilarious and heartwarming world they’ve created, to U.S. audiences through this sale to Hulu.”

“JANN is quickly becoming an iconic comedy sensation in Canada, and launching on Hulu is the first step in sharing this series with the rest of the world,” said Andrew Barnsley of Project 10 Productions and Jordy Randall of SEVEN24 Films in a shared statement.

“I cannot even begin to express my excitement and sincere gratitude to be partnered with the incredible people at Hulu,” said Jann Arden, co-creator, star, and executive producer. “We look forward to having JANN join their lineup of world class programming and we can’t wait to launch south of the border.”

JANN is created by multi-platinum award-winning Canadian singer, songwriter, broadcaster, and author Jann Arden, who is also an Executive Producer alongside co-creators Leah Gauthier and Jennica Harper, who also serves as Showrunner. In JANN, Arden plays a fictionalized, self-deprecating version of herself: a singer songwriter of a “certain age” in severe denial of the harsh reality that her former music career is slowly (okay rapidly) fading away. But it’s not just Jann’s career that’s on life support – she’s newly single (don’t remind her), her sister may disown her, and her mother may be showing early signs of memory loss. Jann’s personal life is in shambles and she’s convinced that the cure-all is to enlist a new manager to help rebrand her image. Jann is at the crossroads between who she was and who she wants to be. Can Jann stage a comeback, reclaim fame… and be there for the people who love her?

Season 2 of JANN airs Mondays at 8 p.m. ET/PT on CTV, with episodes from both seasons streaming on CTV.ca, the CTV app, and Crave.

Project 10 is a global television production company with offices in Toronto and Los Angeles specializing in scripted comedy. The company works closely with high-profile talent to develop and produce compelling content for the worldwide marketplace. The principal executives for Project 10 Productions Inc. are Andrew Barnsley, Ben Murray (Toronto) and Andrew Moncrief (Los Angeles). Leveraging their considerable strengths and decades of experience with those of partner and three-time MLB All-Star Vernon Wells, Project 10 has established itself as a go-to partner for domestic and international creators, broadcasters and distributors alike.

SEVEN24 Films is an independent film and television production company whose work has spanned over two decades. Executive Producers Tom Cox and Jordy Randall have produced dramatic series, mini-series, television movies and feature films garnering over one hundred industry awards and nominations. Their focus on integration of scripted programming with interactive content and social media has helped make Heartland and Wynonna Earp two of the most dynamic scripted television projects in the digital space.

In addition to the People’s Choice Award winning series, Wynonna Earp, current projects include: Family Law, a one-hour legal series for Global, JANN, the #1 new Comedy on CTV, and the hit family series Heartland, the longest running one-hour series in Canadian history, now in its fourteenth season for CBC and UPtv.

Previous projects include Fortunate Son, a political thriller for CBC and NBCU International, Dark Cargo, a noir thriller for YouTube Premium, Young Drunk Punk for Rogers and CBC, the Canadian Screen Award winner Borealis, the Gemini Award winning movie Mayerthorpe and Gemini Award winning Mini-Series Burn Up. Tom Cox and Jordy Randall were also co-producers on numerous high-profile feature films including the Academy Award nominated Brokeback Mountain, The Assassination of Jesse James by the Coward Robert Ford and Resurrecting the Champ and are both recipients of the Queen Elizabeth II Diamond Jubilee Medal in recognition of their contribution to the arts.

22 years of pent-up zaniness coming your way! All-new episodes of Animaniacs premiere November 20, only on Hulu!

They’re back! The Warner brothers, Yakko and Wakko, and the Warner sister Dot, have a great time wreaking havoc and mayhem in the lives of everyone they meet. After returning to their beloved home, the Warner Bros. water tower, the siblings waste no time in causing chaos and comic confusion as they run loose through the studio, turning the world into their personal playground. Joining Yakko, Wakko and Dot, fan-favorite characters Pinky and the Brain also return to continue their quest for world domination.

DESCRIPTION: Every season. Every episode. Every scheme. It’s Always Sunny in Philadelphia – Now streaming on FX on Hulu.

Hulu’s Eater’s Guide to the World 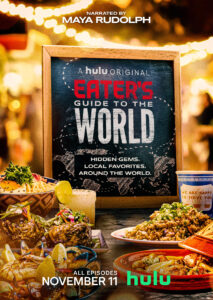 Check out the official trailer and key art for upcoming original series Eater’s Guide to the World, narrated by Maya Rudolph.

All 7 episodes premiere Wednesday, November 11th, only on Hulu!

Discover the most surprising culinary destinations in Eater’s Guide to the World. Join narrator Maya Rudolph on a quest to find the most unexpected places to score an epic meal, while drinking and dining with the locals along the way.


Video: Trailer – Hulu’s “No Man’s Land”
The series dives into the depths of the Syrian civil war through the eyes of Antoine, a young French man, in search of his estranged, presumed to be dead sister.
[via press release from Hulu]
TRAILER: Hulu’s No Man’s Land

All 8 Episodes Premiere Wednesday, November 18th only on Hulu

No Man’s Land dives into the depths of the Syrian civil war through the eyes of Antoine, a young French man, in search of his estranged, presumed to be dead sister. While unraveling the mystery, piece by piece, Antoine ends up joining forces with a unit of Kurdish female fighters, fierce women and ISIS’ biggest nightmare, and travels with them in ISIS occupied territory. Antoine’s journey crosses paths with adventurers and anarchists, spies and innocent victims, and provides a unique look at the tragic events in Syria, and the way they affect the entire world.

Welcome to Animaniacs. We’ll give you a second to soak it all in. ✨ All new episodes November 20, only on @Hulu!

Panel YouTube Link:
“Discover the Monster” Featurette: https://youtu.be/LFMAIWedadw
You can’t escape what lives within! Discover the monsters and unpack the thought-provoking tales brought to life in Hulu’s new series, Monsterland, based on the collection of short stories from Nathan Ballingrud’s “North American Lake Monsters.” Join cast members Jonathan Tucker, Taylor Schilling, Kelly Marie Tran and Mike Colter, creator/showrunner Mary Laws as they delve into the nightmares and share a look at what happened behind-the-scenes. Moderated by Mashable’s Alexis Nedd.
All 8 episodes of Monsterland are currently available to stream on Hulu.

Panel YouTube Link:
Everyone’s favorite big-headed, egomaniacal supervillain is coming to Hulu! Get an exclusive first look at the upcoming adult animated series, Marvel’s M.O.D.O.K., hear from creators Patton Oswalt and Jordan Blum and meet our hilarious cast of characters voiced by Aimee Garcia, Ben Schwartz and Melissa Fumero. Marvel’s M.O.D.O.K. is coming soon to Hulu.
Coming out of NYCC, the M.O.D.O.K. team has announced a contest where fans can win a chance to appear in the show! To enter, fans will need to follow the official M.O.D.O.K. social media pages, and look for the post with a M.O.D.O.K. comic panel (IG, FB, TW). Fans will need to comment there with their best, most unique caption for a chance to win. The production team will build a puppet head in the winner’s likeness to appear in an episode of the show! The contest is now live and running through this Sunday, make sure to get your entry in!
For first look images from Marvel’s M.O.D.O.K., please go to press.hulu.com.
Date: Coming Soon to Hulu

All 8 episodes of Woke are currently available to stream on Hulu.

From the Nightmares of Clive Barker, Join in on a Conversation with the Cast and Creator of Hulu’s BOOKS OF BLOOD

Panel YouTube Link:
Step into uncharted and forbidden territory, joining the cast and creator of Hulu’s upcoming film BOOKS OF BLOOD for a conversation around the film. Based on Clive Barker’s acclaimed horror anthology, the film will take audiences on a journey through three uncanny tales tangled in space and time. Following a screening of the film, join moderator, Meagan Navarro of Bloody Disgusting, Director, Brannon Braga, and cast Britt Robertson, Rafi Gavron, Anna Friel, Freda Foh Shen and Yul Vazquez while they discuss the movie.
BOOKS OF BLOOD is currently available to stream on Hulu.

Ross Dinerstein’s Campfire (Jiro Dreams of Sushi, Silicon Cowboys), part of Wheelhouse Entertainment, Forbes Entertainment and Olive Hill Media will produce the feature length documentary chronicling the meteoric rise and fall of WeWork and the shared workspace company’s founder and former CEO Adam Neumann exclusively for Hulu. The documentary will be based on Forbes’ comprehensive reporting of WeWork’s bizarre descent from revered unicorn company and Wall Street darling to one of the most controversial tech startups in existence.

“It’s been fascinating to follow Forbes’ coverage of WeWork’s dazzling start as the poster startup of the Unicorn Era to its dizzying descent to one of the most controversial tech startups in history,” said Belisa Balaban, VP Documentaries, Hulu. “By bringing this captivating story and expert reporting to life, Hulu continues to elevate powerful and relevant stories about the human experience and expand its slate of original documentaries including award-winning Fyre Fraud, Minding The Gap, Ask Dr. Ruth and Hillary.”

Added Campfire CEO Ross Dinerstein, “Jed and the team are crafting a compelling film that offers deep access and perspective on one of the more bombastic startups in recent memory. We’re delighted to be releasing this project with Hulu and to join their impressive roster of original documentaries.”

“I came to this story thinking it was all about finance. But I learned it was really about community–those that build it and those that betray it. Being able to dive into this story with Campfire, Olive Hill, Forbes and Hulu has allowed us to explore all of its dimensions,” said Jed Rothstein.

Production on the untitled “WeWork” Hulu Original documentary is close to being complete.

The documentary, which also marks Forbes Entertainment’s first foray into feature film, will unravel how Neumann led WeWork to its peak valuation of $47 billion, and the ensuing tumultuous series of events – allegations of financial self-dealings and erratic behavior – that led to the implosion of the company’s IPO and Neumann stepping down as CEO.

The untitled “WeWork” documentary is slated to debut in 2021 on Hulu.