THE MAGIC IS BACK ON SUNDAYS!
GREY HOUSE’S MILESTONE BIRTHDAY IS CAUSE TO CELEBRATE AND MAY
ALSO SHED NEW LIGHT ON THE MERRIWICK-DAVENPORT CURSE IN
‘GOOD WITCH’ PREMIERING JUNE 14, ON HALLMARK CHANNEL

STUDIO CITY, CA – May 19, 2020 – Middleton gathers together to strike a pose as they
celebrate Grey House’s milestone birthday in “The Tableau,” while the festivities may also bring
to light new information about the Merriwick-Davenport curse on “Good Witch,” premiering
Sunday, June 14 (9 p.m. ET/PT), on Hallmark Channel.

Cassie (Catherine Bell, “Army Wives,” “JAG”) prepares for Grey House’s 225th birthday
celebration and puts Nathaniel Merriwick’s paintings on display. The artwork inspires Martha
(Catherine Disher, “Abby Hatcher”) to direct a tableau vivant to mark the occasion, but with only
two days before the event they’ll have to work fast. Sam (James Denton, “Devious Maids,”
“Desperate Housewives”) tries to appeal to a reluctant Adam’s (Scott Cavalheiro, “The Indian
Detective”) competitive side when encouraging him to keep up his post-op physical therapy.
Cassie welcomes Grey House guest Hayley (Isabel Kanaan, “Haunted or Hoax”), a social media
influencer who is forced to see what life looks like outside the confines of her phone’s camera
lens when her network connection vanishes and she can no longer post photos for her followers.
Martha recruits Stephanie (Kylee Evans, “The Strain”) to head up the town’s Community
Greenhouse committee but the mayor doesn’t get the preferential treatment she hoped for when
the plots are handed out. Meanwhile, Joy’s (Katherine Barrell, “Wynonna Earp”) intuition has
suddenly fallen by the wayside, leading to a misunderstanding when she and Carter (Jason Diaz,
“The 100”) agree to set each other up on blind dates. Taking part in the tableau vivant
temporarily brings Abigail (Sarah Power, “Killjoys”) and Donovan (Marc Bendavid, “Murdoch
Mysteries”) together but in the process, make a discovery that could bring them closer to the key
to breaking the curse.

Struggling musician Shayna (Schram) is on the verge of giving up on her career and returns to her small-town home, when a chance encounter with prolific songwriter Grady (Matter) changes everything. He’s writing a song for country music star Duke Sterling and Shayna seems like the perfect writing partner. The two grow closer and romance blooms as they work on their love song, but when Shayna meets Duke, who takes a liking to her and asks her to be his opening act, it undermines everything she and Grady created and Shayna feels forced to choose between love and possible stardom.

‘LOVE IN THE FORECAST’

On-air weather reporter Leah Waddell (Busby) is getting weary of her bleak dating life and inability to be taken seriously as a budding meteorologist. At her wits end, she makes the decision to stay single and focus on her career for a full year. As soon as she makes this commitment, it literally starts pouring rain and men. As Leah deflects multiple romantic offers, she befriends her new neighbor Mark (Russell), a handsome farmer who teaches her methods to forecast the weather by observing signs in nature. With romance off the table, Leah and Mark grow comfortable and allow their friendship to blossom into something neither of them predicted.

‘LOVE UNDER THE OLIVE TREE’

Nicole (Anderson) has plans to expand her family’s Northern California olive oil business until childhood crush Jake (Hollingsworth), heir apparent to the neighboring ranch and her biggest competitor, discovers the land where Nicole wants to build on may belong to his family, stemming from a decades-long feud since their grandfathers ended their partnership. When a local judge decides to resolve the dispute by awarding it to the winner of the upcoming olive oil competition, the flames are further fanned between the families, but Nicole and Jake begin to find common ground and a romance develops as the big competition looms.


THE MAGIC IS BACK ON SUNDAYS!
CASSIE HELPS HER STUDENTS GAIN A FRESH PERSPECTIVE WHILE
JOY’S DREAM MAY SHINE A NEW LIGHT ON THE MERRIWICK-DAVENPORT CURSE ON
‘GOOD WITCH’
PREMIERING JUNE 7, ON HALLMARK CHANNEL
STUDIO CITY, CA – May 13, 2020 – Cassie’s (Catherine Bell, “Army Wives,” “JAG”) art
history lesson has an impact on one student beyond the classroom on “Good Witch,” while Joy
(Katherine Barrell, “Wynonna Earp”) has a troubling dream that may not be what it seems in
“The Dream,” premiering Sunday, June 7 (9 p.m. ET/PT), on Hallmark Channel.

Cassie moves her art history class to the local museum where her lesson on perspective
transcends the art world and has an impact on her students beyond the classroom. Sam (James
Denton, “Devious Maids, “Desperate Housewives”) performs surgery on Adam (Scott Cavalheiro,
“Mary Kills People”) and although all goes well, only time will tell if he makes a full recovery. Joy
(Katherine Barrell, “Wynonna Earp”) is upset by her dream about Abigail (Sarah Power, “The
Killjoys”) and Donovan (Marc Bendavid, “Murdoch Mysteries”) but what first appears to be a dark
cloud over their relationship could give way to a silver lining. Mayor Martha (Catherine Disher,
“Abby Hatcher”) is excitedly preparing to host a small delegation from a town in France in hopes
of Middleton being named its sister city. But when her overtures with a French flair fall flat, she
takes George’s (Peter MacNeill, “This Life”) advice and pivots her plans to throw an all-American
party complete with an impromptu musical performance by two of Middleton’s own.

The theft of a rare Elizabethan artifact on display at the Lawrenceton Library’s annual fundraising event leads to capital crimes, when Aurora Teagarden (Bure) begins her unorthodox investigation and soon discovers not one – but two – murders committed by someone who would do anything to possess “Leicester’s Gift,” the Tudor crown on loan from the Seattle Museum of History.

Megan (Skarsten) seems to have the perfect life with a wonderful husband named Thomas (Daugherty) and two adorable children. She then finds herself awakening from a coma – and discovers she is not and has never been married. But when she meets Thomas for real, she seizes the chance to help him fall in love with her, again – for the first time.

Rachel (Hendrix) the host of a television show returns to her hometown and reunites with her high school sweetheart, Mitchell (Stine). Her show is changed to become more tabloid driven and Rachel is unsure of what to do. She realizes that having someone to share a life could be more important than fame.


SEASON SIX PREMIERE OF HALLMARK CHANNEL’S ‘GOOD WITCH’ ELEVATES NETWORK TO BE #1-RATED IN WEEKEND TOTAL DAY
Debuts As #1 Scripted Series of The Week
New York, NY, May 8, 2020 – On the heels of a record-setting season finale of Hallmark Channel’s original series “When Calls the Heart”, Sunday night’s Season Six premiere of “Good Witch” boosted the network to rank as the highest-rated on cable in Weekend Total Day. Additionally, the debut established “Good Witch” as the #1 original scripted cable series of the week among Households, Women 18+, and Total Viewers.

The episode averaged a 3.0 Household rating, 2.9 million Total Viewers, and 404,000 Women 25-54 on a L+3 basis, and marked the second highest-rated and most-watched entertainment cable program of the day among Households and Women 18+.

New York, NY, May 1, 2020 – Hallmark Channel’s “When Calls the Heart”, which has built one of television’s most passionate fanbases (#Hearties), concluded its most-watched season in series history Sunday night, while also becoming the #1 original scripted cable series in 2020 to-date among Women 18+.

Averaging a 3.7 Household rating, 3.6 million Total Viewers, and 473,000 Women 25-54 on a L+3 basis, Sunday night’s Season Seven finale marked the highest-rated and most-watched episode in series history across key demographics. In addition, the program elevated Hallmark Channel to be the top entertainment cable network on weekends among Household rating and Women 18+ impressions throughout its Season Seven run.


HALLMARK CHANNEL ANNOUNCES A SEASON EIGHT RENEWAL OF THE
NETWORK’S HIGHLY RATED AND LONGEST- RUNNING ORIGINAL SERIES
“WHEN CALLS THE HEART”
STUDIO CITY, CA –April 26, 2020 – Hallmark Channel has ordered an eighth season of the network’s original, primetime drama series “When Calls the Heart.” It was announced today by series star Erin Krakow during the season seven finale of the hit show. 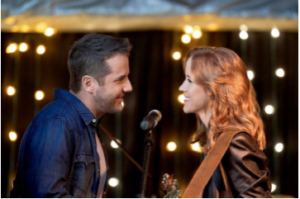 STUDIO CITY, CA – April 6, 2020 – Jessy Schram (“Falling Skies”), Niall Matter (“Eureka”) and Lucas Bryant (“Haven”) star in “Country at Heart,” a new, original movie premiering Saturday, June 6 (9 p.m. ET/PT), on Hallmark Channel as part of the network’s annual “Fall Harvest” programming event. Struggling Nashville singer/songwriter Shayna Cook (Schram) is on the verge of giving up on her career and returns to her small-town home of Silverado just as their local music festival is about to kick off, when a chance encounter with prolific songwriter Grady Connor (Matter) changes everything. He’s trying to write a song for country music star Duke Sterling (Bryant) and Shayna seems like the perfect writing partner. Shayna and Grady grow close and romance blooms as they work on their love song but when she meets Duke, he begins to see her star potential and asks her to be his opening act at the upcoming festival. Although this seems like the opportunity of a lifetime for Shayna, the contentious history between Duke and Grady threatens to undermine everything she and Grady created. As her big break at the music festival approaches, Shayna feels forced to choose between love and possible stardom. Featured in the movie are musical performances by each of the three lead actors, including the original songs “Big Deal,” “A Life in a Love,” and “Right in Front of You,” all written specifically for the movie. “Country at Heart” is produced by HP Country Heart Productions, Inc. Brad Krevoy, Eric Jarboe, Amanda Phillips Atkins, Micheline Blais, Lincoln Lageson and Steve N. White serve as executive producers. David Anselmo is the producer. Bradley Walsh directed from a script by Brigit Stacey, based on a story by Steve N. White.

Part of the Network’s “A Little Romance” Programming Event

STUDIO CITY, CA – September 24, 2020 – Tori Anderson (“Blindspot”) and Benjamin Hollingsworth (“Code Black”) star in “Love Under the Olive Tree,” a new, original movie premiering Saturday, June 20 (9 p.m. ET/PT), on Hallmark Channel as part of the network’s “A Little Romance” programming event. Nicole Cabella (Anderson) has been handed the reigns of her family’s Northern California olive oil business and has big plans for expansion, until she runs into attorney and childhood crush Jake Brandini (Hollingsworth), heir apparent to the neighboring ranch and her biggest competitor. Jake discovers that the area where Nicole wants to expand may belong to his family, stemming from a decades-long feud that’s been simmering since their grandfathers ended their olive oil business partnership. When a local judge decides to resolve the land dispute by awarding it to the winner of the town’s upcoming olive oil competition, it only serves to further fan the flames between the Cabella and Brandini families. But Nicole and Jake, trying to stay above the fray, begin finding common ground as they rekindle old feelings for one another. However, their budding romance is threatened as the big competition looms. “Love Under the Olive Tree” is from Vector Film Services and Bar None Productions. Antonio Cupo, Jessica Yingling and Amar Balaggan are executive producers. Balaggan also serves as producer. Peter DeLuise directed from a script written by Samantha Herman with story by Jenna Milly and Ann Marie Allison


THE MAGIC IS BACK ON SUNDAYS!