FilmRise Wants You To Stay Safe And Cozy Inside And Enjoy Free Streaming Titles Including “Batman,”, “Hell’s Kitchen” and “3rd Rock From The Sun”
Plus Newly Added Classic TV Series “My Favorite Martian” and “The Rifleman” 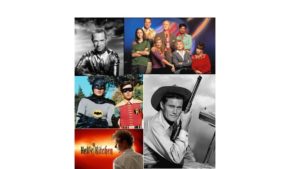 Brooklyn, NY – April 6, 2020 – In this new frontier of self-quarantine and sheltering in place, streaming TV has become a must in providing some much-needed comfort and distraction while we’re indoors and staying safe. FilmRise, the company at the forefront in shaping the ad-supported free streaming landscape, is happy to help with its selection of nostalgic and comforting TV shows streaming for free. FilmRise content can be seen on free streaming platforms including The Roku Channel, Pluto TV, Tubi, IMDb TV, Crackle, Vudu, Sling, Stirr, Samsung TV Plus, Stirr, Xumo and many more – including FilmRise’s own apps on Roku, Fire TV and on iOS and Android powered devices.

FilmRise is happy to announce that two very popular classic TV series – “My Favorite Martian” and “The Rifleman” are now available to stream for free beginning this month. “My Favorite Martian” stars Ray Walston as a Martian who gets stranded in Los Angeles and is rescued by a newspaper reporter played by “The Incredible Hulk” star Bill Bixby. “The Rifleman” chronicles the adventures of a Wild West rancher (Chuck Connors) who wields a custom rapid-fire Winchester rifle. The series had many notable guest stars throughout its run, including Dennis Hopper, Harry Dean Stanton, Martin Landau, and Sammy Davis, Jr., to name a few.

Below are a few lists of popular FilmRise free (with ads) programming available to stream now, broken down by categories we think you will enjoy.