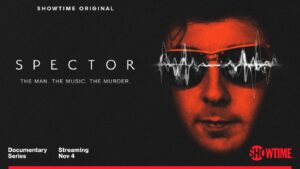 SPECTOR examines how the destinies of Phil Spector and Lana Clarkson became intertwined with the report of a fatal shooting of a woman at the eccentric French chateau style mansion in Los Angeles owned by the legendary music producer. The victim was Lana Clarkson, a charismatic and once prolific film actress whom he had met just that night. Through the lens of this notorious crime and the infamous trial which followed, this four-part documentary series peels back the layers of what actually happened that night to tell the stories of both Clarkson and the man who was convicted of her murder. In doing so, SPECTOR re-examines the life and career of an important yet enigmatic cultural figure of the 20th century – a man responsible for countless hit records, including “Be My Baby,” “Da Do Run Run” and “You’ve Lost that Lovin’ Feeling” – and a bygone era of Hollywood and the music industry.

Argott and Joyce together run 9.14 Pictures. Their recent projects include Framing John Delorean, a documentary feature about the winding, twisted tale of famed auto maverick John DeLorean, and the feature-length doc Believer, which follows Dan Reynolds, the lead singer of Imagine Dragons, as he challenges the Mormon Church’s stance on LGBTQ issues. Upcoming is the definitive feature documentary on heavy metal legend, Ronnie James Dio, called DIO Dreamers Never Die, and the recently released doc series The Bond, from Discovery+, that was executive produced by Susan Downey and Robert Downey, Jr.

James Marsh is an Oscar and BAFTA® -winning and Emmy-nominated director. His 2009 feature Man on Wire won the Best Documentary prize at the Academy Awards®, BAFTAs and Film Independent Spirit Awards, along with the Best Film Jury Prize and Audience Award at the Sundance Film Festival that year. Marsh was nominated for a Best Director Emmy for his work on the series The Night Of, and received a Best Director BAFTA nomination for The Theory of Everything, the feature film on scientist Stephen Hawking, which won the BAFTA for Best Picture in 2015.

Jonathan Chinn and Simon Chinn are co-founders of Lightbox, their production company based in Los Angeles and London. Their recent critically acclaimed series and theatrical releases include SUPERVILLAIN:THE MAKING OF TEKASHI 69, available to stream on SHOWTIME, alongside Tina, Whitney, The Princess, Sins of Our Mother and Curse of The Chippendales.

SPECTOR is produced by Lightbox for SHOWTIME, in association with Sky Documentaries. It is executive produced by Jonathan Chinn, Simon Chinn, James Marsh and Stephen Neely, together with Poppy Dixon and Jack Oliver for Sky. Fifth Season is handling rights outside of the UK and U.S.

Showtime Networks Inc. (SNI), a wholly owned subsidiary of Paramount, owns and operates the premium service SHOWTIME®, which features critically acclaimed original series, provocative documentaries, box-office hit films, comedy and music specials and hard-hitting sports. SHOWTIME is available as a stand-alone streaming service across all major streaming devices and Showtime.com, as well as via cable, DBS, telco and streaming video providers. SNI also operates the premium services THE MOVIE CHANNEL™ and FLIX®, as well as on demand versions of all three brands. SNI markets and distributes sports and entertainment events for exhibition to subscribers on a pay-per-view basis through SHOWTIME PPV®. For more information, go to www.SHO.com.