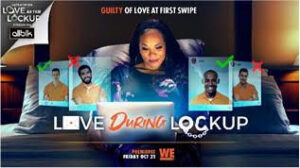 New York, NY – September 22, 2022 – More fiery couples are ready to navigate “Love During Lockup” in WE tv’s second season of the newest spinoff of the hit franchise, premiering Friday, October 21 at 9pm ET.

Love During Lockup documents the fascinating drama that unfolds when ordinary people first decide to pursue relationships with prison inmates and face an early dating period filled with a very specific set of unique challenges. Lonely non-cons and ‘hot’ felons try to keep their romance alive with snail mail letters, expensive phone calls, occasional video visits, and prison proposals…all while having to endure the heartbreak and frustration of the unpredictable prison system. Season two follows four new couples, an eager bachelor, and a returning singleton who can’t resist the lure of paramours in the clink. With more drama, mystery, and crazy reveals than ever before, will these couples have love that lasts until release?

Meet the romance-ready civilians and inmates:

Chelsea & Mike (Richwood, OH)
Battling a feeling of loneliness, Chelsea found herself checking out a Facebook inmate pen pal group, where she met Michael. Ever determined, Michael began to teach himself ASL to connect with Chelsea – a feat no man had ever attempted for Chelsea, who is deaf. Only having communicated in 30-second videograms and letters, she hopes a planned prison visit will give them the chance to meet face-to-face so they can finally sign in person. But will the surprising secret she learns about Michael during their first visit doom the relationship?

Emily & Dauri (Union, NJ)
Falling in love with an inmate was the last thing Emily expected, especially amid pursuing a master’s degree in criminal justice. However, after connecting with the charming Dauri, via a pen pal ad, it now seems like this powerhouse will let anything slide, even scams and cheating – but only if it comes with a big ring…that she’s using his stimulus money to buy! Though they’ve been together for four years, Emily has never actually seen Dauri in person and their friends can’t help but question her choices and if she’s hiding something or doing some scamming of her own. Could the non-con be conning the inmate this time?

Melissa & Louie (Atlantic Highlands, NJ)
“Jersey Girl” Melissa’s quest for prince charming had come up short, until one day at work as a mail carrier, she came across inmate letters. This led her to an unexpected prison pen pal of her own…her old high school crush, Louie. Though these love birds have crossed paths in the past, they ran in separate circles and Melissa couldn’t resist this opportunity to re-connect. Facing overall disapproval from her outspoken family, her father’s refusal to walk her down the aisle, and feelings of loneliness that lead her to a prison wives group…Melissa remains madly in love and determined to move to Georgia to be finally be with bad boy Louie.

Jessica & Dustin (Jacksonville, FL)
After a messy divorce, Jessica pursued a career in Corrections Nursing as a way to get over her ex and have a sense of control over men. Then, everything changed when she met inmate Dustin and she chose to sacrifice her career to follow her heart. Although she lost her job, Jessica gained the love of her life and is now ready to uproot her life and move to Tennessee to be with him after his release – but not without meeting his family first.

Mark (Las Vegas, Nevada)
Mark is an ambitious man with two businesses and love of travel and adventure. Despite his busy schedule, Mark has set aside time to find “the one.” After months of failed dating app connections, Mark came across an inmate pen pal group on Facebook and his natural curiosity led him down a rabbit hole. What started on a whim has turned into a quest for love and Mark is sure there are incredible women who are his type – “crazy girls” – waiting for him. Never one to put all his eggs in one basket, using multiple prison pen pal groups, this bachelor hopes of one day turning an emotional connection into a physical one.

Tai (Buffalo, NY) – RETURNING
The ultimate serial inmate dater, Tai, is back! Despite her friends trying to get to the bottom of why such a catch always goes for troubled men, Tai continues pursuing jailbirds including her #1 inmate Hottie, who proposes even though Tai has met his girlfriend, Boston. Never a man’s second choice and with options aplenty, Tai is also talking to inmate BB and new squeeze Dough Boy when her boss at the funeral home, Rinaldo, starts to have feelings for her and urges Tai to go for a safe choice like him. How will Tai juggle her engagement, several inmate boyfriends, and a free world man? Will one of her locked-up lovers find out about her secret relationship on the outside?

About SHARP Entertainment
“Sharp Entertainment, a part of Sony Pictures Television, is one of the biggest creative powerhouses in unscripted television production today. Led by producer Matt Sharp since 2003, Sharp is one of the industry’s leading production enterprises worldwide delivering thousands of hours of programming and unparalleled ratings achievement across multiple networks. Sharp’s mega-hit franchise, TLC’s “90 Day Fiancé,” is a top-performer on all of cable along with spinoffs including “90 Day Fiancé: Happily Ever After,” “90 Day Fiancé: Before the 90 Days,” and “90 Day Fiancé: The Other Way.” Sharp is also behind WE TV’s buzzy docu-series “Love After Lockup,” as well as top-rated “Man v. Food” for the Cooking Channel. Other notable Sharp series include “Extreme Couponing” for TLC, “Doomsday Preppers” for National Geographic, and the long-running hit “The Fabulous Life” for VH1, among many others.”

About WE tv:
With compelling, can’t miss unscripted shows, WE tv’s programming is fueled by personalities and relationships filled with purpose and passion. WE tv welcomes everyone and creates an inclusive experience across all platforms: on TV, online, on demand, and social media, embracing how today’s digitally savvy, socially engaged audiences connect through content, using it as a catalyst to drive conversation and build community. Further building on this mission, current WE tv originals are now available to stream on WE tv’s sister platform, ALLBLK. WE tv is owned and operated by AMC Networks Inc., and its sister networks include AMC, BBC America, IFC, SundanceTV and streamers Acorn TV, ALLBLK, AMC+, Shudder and Sundance Now.