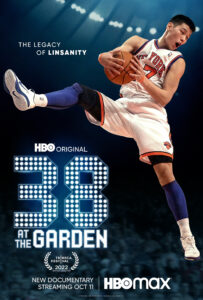 38 AT THE GARDEN, the HBO Original documentary short directed by Frank Chi, debuts TUESDAY, OCTOBER 11 (9:00-9:40 p.m. ET/PT) on HBO and will be available to stream on HBO Max. The documentary is executive produced by journalist Lisa Ling and produced by Samir Hernandez and Academy Award®-winner Travon Free.

Synopsis: 38 AT THE GARDEN chronicles the extraordinary ascendance of point guard Jeremy Lin during his landmark 2012 season with the New York Knicks. Lin, an undrafted Harvard graduate, shocked fans, stunned his teammates and galvanized Asians around the world when he scored 38 points at Madison Square Garden against the Los Angeles Lakers, solidifying Lin’s hot streak and the “Linsanity” craze.

A decade later, Lin’s stature as a groundbreaking, cultural icon stands in stark relief to the recent hate crimes against the Asian American and Pacific Islander (AAPI) community. 38 AT THE GARDEN recognizes a pivotal moment in time for Lin and celebrates a phenomenon that was bigger than basketball for the world.

Featured interviews: 38 AT THE GARDEN features a candid, new interview with Lin. In addition, journalists Lisa Ling and Pablo Torre and comedians Ronny Chieng, Hasan Minhaj and Jenny Yang speak to the cultural impact of his success, while Knicks teammates, Tyson Chandler and Iman Shumpert, attest to his prowess on the court.