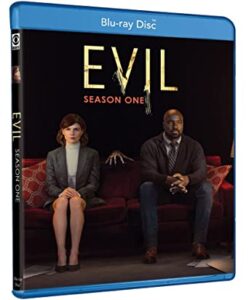 EXTRAS: Evil Season One: Genesis; Does Evil Exist?; Deleted/Extended Scenes
—–Where does science end and the supernatural begin? That’s the mysterious – and dangerous – line explored by skeptical psychologist Kristen Bouchard (Katja Herbers) when she teams up with priest-in-training David Acosta (Mike Colter) to explore the evil humanity is capable of. Together, they dive into the Catholic Church’s files of occult phenomena to bring them to rational conclusions, or attempt to. Angel sightings, demonic possessions, prophecies and conspiracies will test their faiths and push them to their limits, as they learn that the world’s darkness may run deeper than they ever thought possible. Experience the investigation across 13 thrilling episodes of EVIL Season One in this 3-disc collection.
NOTE: this title has been available on DVD format since June 2020, but is now being offered on Blu-ray Disc for the first time as an MOD (Manufacture On Demand) item 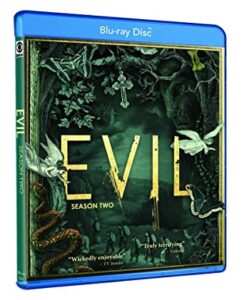 EXTRAS: Deleted Scenes
—–In Season 2 of Evil, Kristin (Katja Herbers) struggles with her darker nature after killing a man, while David (Mike Colter) suffers temptation as he gets closer to his ordination. Meanwhile Ben (Aasif Mandvi) is visited by night terrors that prey on his greatest fears. Includes all 13 episodes! 3-disc set.
NOTE: this title has been available on DVD format since June 2022, but is now being offered on Blu-ray Disc for the first time as an MOD (Manufacture On Demand) item

—–As an exceptionally brilliant inventor with unlimited resources and unimaginable wealth, the devilishly charming Tom Swift (Tian Richards) is a man who many men would kill to be, or be with…a man with the world in the palm of his hand. But that world gets shaken to its core after the shocking disappearance of his father, thrusting Tom into a breathtaking adventure full of mysterious conspiracies and unexplained phenomena. 2-disc set.
NOTE: as of today’s writing, this title has only been announced for DVD format 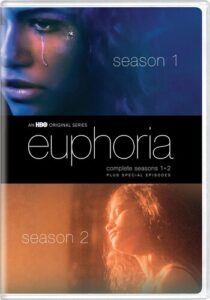 EXTRAS: Special Episodes
—–Season 1 of this intense HBO drama focuses on 17-year-old Rue Bennett (multimedia star Zendaya), a drug addict fresh from rehab who is struggling to stay clean. Ahead of the second season, the Emmy-winning series returns with two special episodes set over the Christmas holiday. Season 2 continues to follow Rue’s dynamic group of friends as they enter a new year and question their choices. 5-disc set.
NOTE: as of today’s writing, this title has only been announced for DVD format 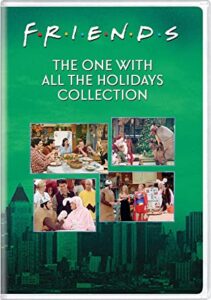 EXTRAS: Includes Commentaries on Select Episodes
—–Put on the Thanksgiving pants and settle in for holiday laughs! What are holidays but a time to be among Friends? Love might not be in the air, but laughs are when Chandler goes on a blind date with Janice on Valentine’s Day. Christmas is the season for even more laughs when Monica and Rachel give cookies instead of cash to the building’s super, and he neglects to fix the heat during a sweltering holiday party. And Joey’s job selling Christmas trees causes Phoebe to worry for all the leftover trees that aren’t picked. Ross gives a novel interpretation of the season with his “holiday armadillo.” Halloween brings out guest star Sean Penn, and Thanksgiving brings (Jennifer Aniston’s then-husband) Brad Pitt as an old friend who can’t stand Rachel. The gang’s reminiscences about their worst holidays involve Joey getting his head stuck in a turkey and Phoebe losing her arm (twice) in 1862 and 1912! There’s no better way to celebrate the season than with Friends in this 15-disc collection. 2-disc set. 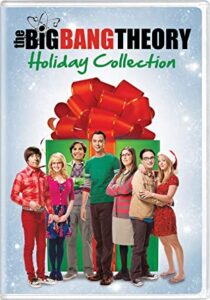 —–GEEK OUT FOR THE HOLIDAYS! Jettison the gingerbread. Nix the Nutcracker. Your yuletide season just got exponentially funnier! We’ve gathered nine beloved holiday-themed episodes of The Big Bang Theory in one prodigious package. Relive all the laughs with Leonard, Sheldon, Penny, Howard, Raj, Bernadette, and Amy as they put their unique spin on the season’s festivities. Flash back to Sheldon’s fanatical gift-giving protocol. Toast the Thanksgiving when a ghost from Penny’s past comes back to haunt her. Gather with the gang as they contemplate where they’d be if they never met Sheldon. And that’s just the start. Sit back and enjoy a new and hilarious holiday tradition with everybody’s favorite phenoms. Single-disc title.

—–Based on TNT’s hit movie franchise, The Librarians centers on an ancient organization dedicated to protecting an unknowing world from the secret, magical reality hidden all around. Rebecca Romijn, Christian Kane, Lindy Booth and John Harlan Kim star in the TV series as protectors of the world’s mystical treasures, with Emmy winner John Larroquette as their reluctant caretaker. The series features Noah Wylie as Flynn Carsen, the character made popular in the original TV movies. This set also includes the following complete Librarian features: Quest for the Spear, Return to King Solomon’s Mines, and Curse of the Judas Chalice. 14-disc set.
NOTE: as of today’s writing, this title has only been announced for DVD format 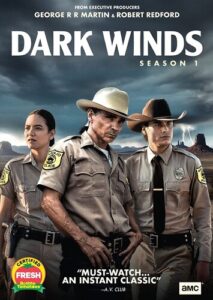 —–On a remote outpost of the Navajo Nation near Monument Valley in 1971, Lieutenant Joe Leaphorn of the Tribal Police is besieged by a series of seemingly unrelated crimes. The closer he digs to the truth, the more he exposes the wounds of his past. He is joined on this journey by his new deputy, Jim Chee, who has his own old scores to settle. Together, the two men battle the forces of evil, each other and their own personal demons on the path to salvation. Zahn McClarnon, Kiowa Gordon, Jessica Matten, Deanna Allison, Rainn Wilson, Noah Emmerich. From Executive Producers George R R Martin and Robert Redford. 2-disc set in either format. 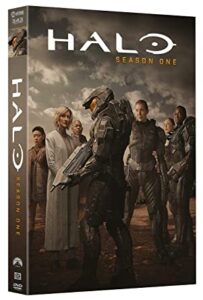 EXTRAS: Featuring over 5 hours of EXCLUSIVE Special Features!
—–After years of human civil war and growing political unrest, mankind’s very future is threatened when our outermost colonies intrude upon the sacred worlds of the Covenant…a fanatical powerful alliance of alien species. As the Covenant destroys world after human world, only one soldier slows their advance: a cybernetically enhanced “Spartan” supersoldier, the Master Chief. But as the incredible mystery of the Covenant’s true ambition, and the secrets of his own enigmatic past converge, then he will have to decide if humanity is a cause worth saving. This collection includes every exhilarating episode. 5-disc set in each format. 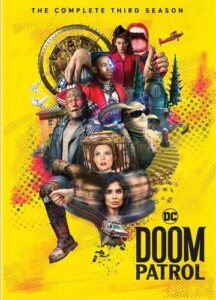 EXTRAS: LIFE AFTER DEATH (All-New Featurette – Going inside Season 3 of Doom Patrol with an in-depth look at all the mayhem and madness that follows on the heels of Niles Caulder’s death. Showrunner Jeremy Carver and the cast of the series discuss the loss of Niles, new beginnings, awakenings and new journeys in a unique way); FILTER NOT INCLUDED: ROBOTMAN’S BEST LINES (All-New Featurette – He may be mostly machinery, but one thing Robotman does not have is a filter. As The Doom Patrol’s most foul-mouthed robot/grandfather, Cliff Steele never holds back exactly what he’s thinking); Digging Deep Into Doom Patrol: Introducing Madame Rouge; This Season On – The Doom Patrol
—–DC’s unlikeliest group of Super Heroes are back! The third season of Doom Patrol opens with Niles Caulder’s “super” daughter Dorothy’s confrontation with the Candlemaker, that leads to a devastating loss. The Doom Patrol is at a difficult crossroads, and each member struggles to face who they are and who they want to be. And things get a whole lot more complicated when Madame Rouge (Michelle Gomez) arrives in a time machine with a very specific mission. If only she could remember it. 3-disc set in either format.
NOTE: this title was released in Canada back in May 2022; this is its first USA release

EXTRAS: over 80 minutes of bonus features
—–Adapted from Deborah Harkness’ best-selling trilogy of novels, A DISCOVERY OF WITCHES is a bold and romantic thriller that uncovers a secret underworld of vampires, witches and daemons hiding in plain sight for fear of persecution by humans. Brilliant historian Diana Bishop is a witch denying her own heritage. But when she unexpectedly calls up an ancient, bewitched manuscript from Oxford’s Bodleian Library, she finds herself thrown into the heart of a dangerous mystery – and into the path of the enigmatic geneticist and vampire Matthew Clairmont. Across three distinctive and gripping seasons, Diana and Matthew’s quest to solve the mystery of the book and their own long-prophesied connection to it throws them into the path of dangerous enemies. Season 2 takes them back to the 16th century, crossing paths with historical figures Diana thought she could only dream of meeting, as she comes into her own incredible power. In Season 3, Diana and Matthew must try to make scientific breakthroughs into a terrible disease that affects their own family, deal with huge loss, new beginnings, and old foes, as their journey takes them towards a thrilling and incendiary conclusion. 6-disc set in either format.
NOTE: the attached package art may not be finalized, and could be subject to change 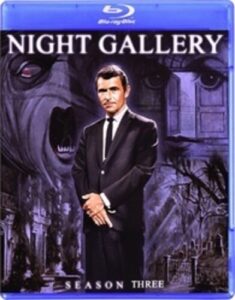 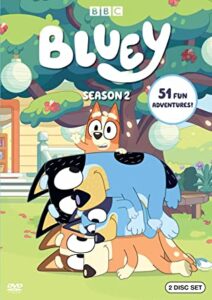 —–51 fun adventures! 2-disc set.
NOTE: this season was previously released on DVD in August 2022 as part of the 4-disc set Bluey – The Complete Seasons 1 & 2; this is the first time the second season is being offered on DVD separately