SHOWTIME TO RELEASE NOTHING COMPARES ON DEMAND AND STREAMING FRIDAY, SEPTEMBER 30
PREMIERES ON AIR SUNDAY, OCTOBER 2 AT 10 PM ET/PT 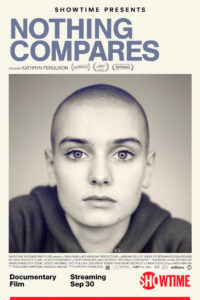 Film Will Have an Awards Qualifying Run in New York and Los Angeles Starting Friday, September 23
Will Release Theatrically in the U.K. and Ireland Friday, October 7

LOS ANGELES – September 15, 2022 –SHOWTIME announced today its feature documentaryNOTHING COMPARESwill have an awards-qualifying run starting Friday, September 23 at Cinema Village in New York and Laemmle Monica Film Center in Los Angeles. The film will be available to stream for SHOWTIME subscribers Friday, September 30 ahead of its on-air premiere Sunday, October 2 at 10 p.m. ET/PT. The documentary will release theatrically in the U.K. and Ireland on Friday, October 7.

Directed by Kathryn Ferguson(Taking the Waters, Space to Be),NOTHING COMPAREScharts Sinéad OʼConnorʼs phenomenal rise to worldwide fame and examines how she used her voice at the height of her stardom, before her iconoclastic personality led to her exile from the pop mainstream. Focusing on O’Connor’s prophetic words and deeds from 1987 to 1993, the film presents an authoritative, richly cinematic portrait of this fearless trailblazer through a contemporary feminist lens.

The archive-led documentary features era-defining music videos and concert performances alongside previously unseen footage from this period. The film is underpinned by a new interview with O’Connor herself, in which she reflects on events in her own words from a present-day perspective. Intimate first-hand contributor interviews add to the tapestry with additional insights from contemporary artists, musicians and social commentators introducing broader themes of Irish history, politics and global activism, all the while reflecting on O’Connor’s artistry, impact and legacy.

Belfast-born Ferguson is an innovative and boundary-pushing director who has focused on short-form work centered on identity, gender politics and community. NOTHING COMPARESis her documentary feature directorial debut and was an official selection in the World Cinema Documentary Competition at the Sundance Film Festival earlier this year. The film has gone on to win various awards at film festivals this year, including Best Irish Documentary at Galway Film Fleadh, the Audience Award for Best Documentary at Aegean Film Festival, and the Audience Award at Docs Ireland.

Showtime Networks Inc. (SNI), a wholly owned subsidiary of Paramount, owns and operates the premium service SHOWTIME®, which features critically acclaimed original series, provocative documentaries, box-office hit films, comedy and music specials and hard-hitting sports. SHOWTIME is available as a stand-alone streaming service across all major streaming devices and Showtime.com, as well as via cable, DBS, telco and streaming video providers. SNI also operates the premium services THE MOVIE CHANNEL™ and FLIX®, as well as on demand versions of all three brands. SNI markets and distributes sports and entertainment events for exhibition to subscribers on a pay-per-view basis through SHOWTIME PPV®. For more information, go to www.SHO.com.