—–Long before Donnie Brasco brought similar drama to the big screen, Golden Globe winner Ken Wahl brought charisma, credibility, and chutzpah to his small-screen role as Vincent Terranova, a handsome 30-year-old agent with the FBI’s Organized Crime Bureau. How does a deep-cover operative keep his sanity and morality intact when the criminal lifestyle he’s sworn to bring down from within is more compelling than his own? Federal Agent Vincent Terranova (Ken Wahl) is plagued by this question in this innovative take on 80s cop dramas. Created by veteran hit producer Stephen J. Cannell, Wiseguy veers from traditional ‘bad guy of the week’ police procedural by breaking the drama into multi-episode story arcs that followed an Organized Crimes Bureau case – and its charismatic criminal suspects – to its logical conclusion. No matter the cost to criminal, victim, or cop. GUEST STARRING: Jonathan Banks, Kevin Spacey, Ray Sharkey, Joan Severance, Fred Thompson, Jerry Lewis, Stanley Tucci, David Strathairn, Billy Dee Williams, and Steven Bauer. All 75 episodes from all 4 seasons.
NOTE: previous DVD releases of Wiseguy had much of the music altered or removed, as compared to the original TV broadcasts: the new studio hasn’t said outright one way or the other, but there is NO indication in VEI’s announcement that the music is back in the re-release of these same episodes; we would tell you to expect the music to still be altered/missing on these DVDs…HOWEVER, one indication that we might be incorrect about that is the fact that VEI is touting “all 75 episodes,” which would include the 8-episode arc from Season 2 called “Dead Dog Records,” which has not previously been released on DVD in North America (neither with Ventura’s releases in 2003-05, nor with Mill Creek’s 67-episode “Collector’s Edition” release in 2010) due to music rights. On the other hand, even if these 8 episodes are included, it does NOT necessarily mean that all of the original music would be included (such as the iconic score from the Sonny Steelgrave arc with “Knights In White Satin”). Be careful if you purchase, is all we are suggesting!
.
COMING ON 8/16:
* Hidden Assets – Series 1 (RLJ/Acorn)
$39.99 SRP DVD 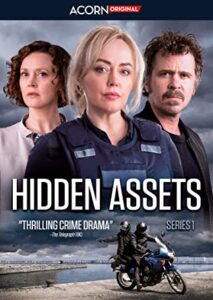 —–A woman lies dead in an Antwerp apartment; nearby, a suicide bomber detonates his device at a fashion show. In Ireland, Detective Emer Berry (Angeline Ball, Acceptable Risk) of the Criminal Assets Bureau finds rough diamonds in a raid on a small-time drug dealer, along with the deed to that luxury Antwerp flat. When she heads to Belgium to investigate, Emer is confronted by Chief Inspector Christian de Jong (Wouter Hendrickx, Blackout) of the anti-terrorism squad. Reluctantly banding together, they begin to untangle an international conspiracy involving drugs, terrorism, and corrupt corporate and political leaders. Caught up in this web of greed are the dead woman’s employer, heiress Bibi Melnick (Simone Kirby, His Dark Materials), and the Brannigans, a wealthy Irish business dynasty. Drawn into a battle of wits with the family, Emer, Christian, and the CAB team must follow the money to stop another terrorist attack…before it’s too late. 2-disc set.
.
COMING ON 8/23:
* Chicago Med – Season 7 (Universal)
$34.98 SRP DVD MOD 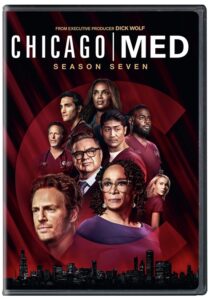 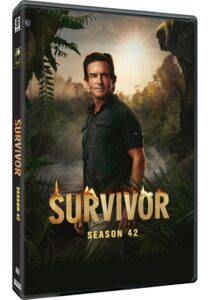 EXTRAS: Secret Scenes; Tribal Council Voting Scenes
—–Stranded in the beautiful islands of Fiji, these 18 determined new castaways are divided into three tribes of six, and face one of the most dangerous seasons in the history of the show. The series evolves even further when this season introduces fresh elements to the competition that intensifies the battle, and tests even the strongest super fan. The mental and physical challenges force players to choose between personal risk and reward, while still navigating the complex social game and attempting to forge alliances to last another day. The individuals competing are from diverse backgrounds with the same ultimate goal: to outwit, outplay and outlast, and ultimately be crowned Sole Survivor. Hosted and executive produced by Emmy Award winner Jeff Probst. 4-disc set. 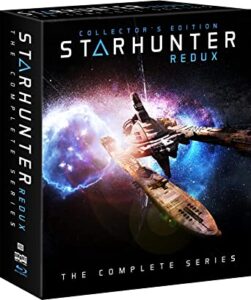 EXTRAS: Behind-The-Scenes Featurette; Effects: Before And After; Starhunter At FanExpo; Green Screen Follies; The Rudolpho Monologues; Recording The Theme; Composer Donald Quan…Live!; Promos
—–GALAXY-SIZED ADVENTURE AWAITS! INCLUDES ALL 44 EPISODES! Starhunter REDUX has finally landed! This beloved science-fiction adventure series starring Michael Paré (Streets Of Fire, Eddie And The Cruisers), Stephen Marcus (Lock, Stock And Two Smoking Barrels), Tanya Allen (Silent Hill), Claudette Roche (The Game), and Clive Robertson (Darkstar: The Motion Picture) is finally available as a 10-Disc Blu-ray set including all 44 episodes, with all of the expanded footage, updated special effects and the originally intended 16:9 aspect ratio intact! Welcome to the year 2275. Earth has colonized the entire solar system … but danger still lurks in every corner of the universe. Bounty hunter Dante Montana (Paré) and his crew travel among the stars on the trail of interplanetary criminals, including the Raiders – an evil cabal that Dante believes kidnapped his beloved son. Elsewhere, covert forces wage a desperate war to unlock the secrets of the mysterious Divinity Cluster, believed to hold powerful knowledge that in the wrong hands would offer the power to dominate the known universe.
NOTE: this item was originally scheduled for release this past Tuesday, July 26th, but Shout! Factory has delayed the title until August 23rd 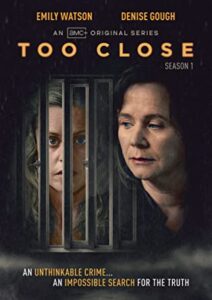 —–Dr. Emma Roberston is the psychiatrist assigned to work on the case of a young mother accused of a terrible crime, and assess her sanity to determine whether she faces prison, a secure psychiatric hospital, or rehabilitation and release. Emma hopes that the case will make her career, but the sessions quickly become a complex psychological game of cat and mouse. Emma gradually starts to understand what drove the woman to her crime, but is she getting too close to someone who is beyond redemption?
.
COMING ON 8/30:
* 61st Street – Season 1 (RLJ/Image)
$34.97 SRP DVD; $35.97 SRP Blu-ray 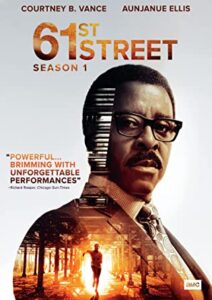 —–61st Street follows Moses Johnson, a promising Black high school athlete who is swept up into the infamously corrupt Chicago criminal justice system, and Franklin Roberts, the public defender who takes up his case. While Roberts has promised his wife he’ll retire, he takes on this case because he recognizes its potential to upend the entire Chicago judicial system, challenging the institutional racism and endemic corruption at its heart. 2-disc set in either format. 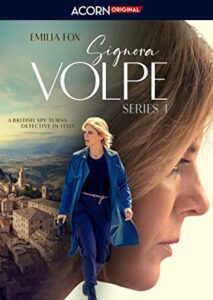 —–Sylvia Fox (Emilia Fox, Delicious) is a top British spy, but she’s disillusioned with MI6 after one betrayal too many. In need of a respite, she heads to Italy for her niece’s wedding. But when the groom goes missing, leaving a dead body behind, Sylvia has a mystery to solve – covertly, of course. Enchanted by the town of Panicale and longing to reconnect with her sister (Tara Fitzgerald, Game of Thrones), Sylvia buys a crumbling old house on a hillside and decides to start anew in Umbria. But this secret agent was never cut out for a quiet life, and she’s soon tackling a variety of cases, from a skeleton unearthed in an archaeological dig to a kidnapped truffle pig and a blackmail scheme with diplomatic tensions. All the while, she grows closer to a handsome local cop, Capitano Giovanni Riva (Giovanni Cirfiera, American Crime Story), even as her ex-husband and ex-colleague, Adam (Jamie Bamber, Battlestar Galactica), tries to lure her back. 2-disc set.
.
COMING ON 9/6:
* Ride with Norman Reedus – Season 5 (RLJ/Image)
$29.99 SRP DVD 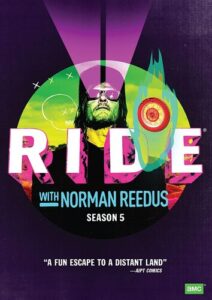 —–Join Walking Dead star and motorcycle enthusiast Norman Reedus on epic road trips around the world. In Season 5, Reedus travels to New Zealand, where he is joined by fellow actors Josh Brolin and Dylan McDermott. Then he revisits favorite moments from past adventures, telling behind the scenes stories and pulling the curtain back to reveal what it took to film this incredible series. 2-disc set.
.
COMING ON 9/20:
* DMZ – The Limited Series (Warner Canada)
CA$29.98 SRP DVD; CA$39.99 SRP Blu-ray 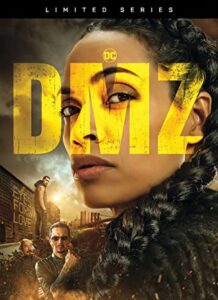 —–Based on the popular DC graphic novel of the same name, this adrenalized and expansive limited drama series follows intrepid medic Alma Ortega (Rosario Dawson) on her tireless, eight-year search for her missing son in a near-future America embroiled in a bitter civil war. With no other options, Alma negotiates her way into the only place she hasn’t been able to look: Manhattan – now a lawless demilitarized zone overrun by rival factions vying for power, as a race for control plays out between ruthless community leaders Parco Delgado (Benjamin Bratt) and Wilson Lin (Hoon Lee). While Alma’s harrowing quest thrusts her into the middle of this dangerous no man’s land, she unexpectedly emerges as a vital source of something needed most in the DMZ: hope.
NOTE: this has been announced in Canada only; there is no USA announcement yet 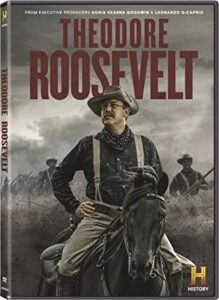 —–A two-part documentary, THEODORE ROOSEVELT explores the life of one of history’s most fascinating figures: a cowboy, soldier, statesman, conservationist, adventurer, reformer, author, and finally, U.S. president. Featuring over five hours of expert interviews, rich archival material, and vivid live-action sequences, this documentary charts Roosevelt’s journey from his sickly childhood to being a champion for the working man to becoming, at age 42, the youngest president of the United States, whose legacy and impact on progressive political policies reverberate today.
.
COMING ON 9/27:
* Kung Fu – The Complete 2nd Season (Warner)
$24.98 SRP DVD 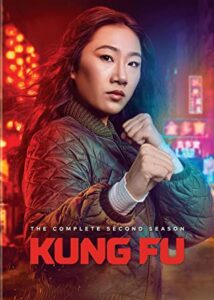 —–It’s been six months since the explosive events of the season one finale, and we find Nicky (Olivia Liang) and the Shens in a great place: Nicky’s been using her kung fu skills to keep Chinatown safe, she and Henry (Eddie Liu) are only deeper in love with each other, and unlike season one, the Shen family are all in the know about Nicky’s extracurricular activities. Jin and Mei-Li (Tzi Ma and Kheng Hua Tan) have righted the ship and Harmony Dumplings has seen an extraordinary recovery – the restaurant is doing better business than ever. Everything’s been great in Nicky’s life… that is, until the reemergence of Russell Tan (Kee Chan), and the surprise appearance of Nicky’s cousin, Mia (Vanessa Yao). 3-disc set.