Winning Time: The Rise of the Lakers Dynasty: The Complete First Season 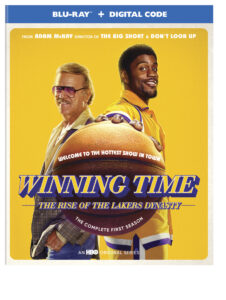 Featuring All 10 Smash Hit Episodes from the Series

Based on the book “Showtime: Magic, Kareem, Riley and the Los Angeles Lakers Dynasty of the 1980s” by Jeff Pearlman, and renewed for a second season on HBO and HBO Max, Winning Time: The Rise of the Lakers Dynasty: The Complete First Season is a fast-break series that chronicles the professional and personal lives of the 1980s Los Angeles Lakers, one of sports’ most revered and dominant dynasties — a team that defined an era, both on and off the court.

The Swan
Is That All There Is?
The Good Life
Who the F**k Is Jack McKinney?
Pieces of a Man
Memento Mori
Invisible Man
California Dreaming
Acceptable Loss
Promise Land
DIGITAL

Winning Time: The Rise of the Lakers Dynasty: The Complete First Season is currently available to own on Digital. Digital purchase allows consumers to instantly stream and download to watch anywhere and anytime on their favorite devices. Digital movies and TV shows are available from various digital retailers including Prime Video, Apple TV, Google Play, Vudu and others.

Warner Bros. Home Entertainment (WBHE) brings together Warner Bros. Entertainment’s physical and digital distribution businesses in order to maximize current and next-generation distribution scenarios. An industry leader since its inception, WBHE oversees the global distribution of content through packaged goods (Blu-ray Disc™ and DVD) and digital media in the form of electronic sell-through and video-on-demand via cable, satellite, online and mobile channels. WBHE distributes its product through third party retail partners and licensees.