WITH LIFE AT ROCK BOTTOM, A MAN ADRIFT SETS OUT TO RECLAIM LIFE, LOVE AND LOST INNOCENCE IN A TENDER DRAMEDY STARRING BRECKIN MEYER AND EMILY KINNEY 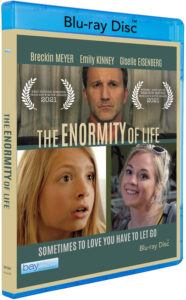 THE ENORMITY OF LIFE

After his life hits rock bottom, emotionally despondent Casey (Breckin Meyer, Happily, Clueless, Road Trip) decides to end it all. But when a timely phone call with some unexpected news about a substantial inheritance forestalls his suicide, it sets off a chain of events that just may save his life including meeting a quirky single mother (Emily Kinney, “The Walking Dead”, “The Flash”) and her precocious, yet troubled, young daughter (Giselle Eisenberg, “Life in Pieces”, “American Housewife”), who happens to have an unhealthy obsession with mass shootings. When his bipolar mother goes missing, Casey enlists their help, along with his selfish, estranged sister, Missy (Debra Herzog). And together, through numerous jarring twists and emotional turns, they embark on a journey of hope and healing in THE ENORMITY OF LIFE, a tender, poignant dramedy about life, love and the pursuit of lost innocence.

Directed by Eric Swinderman, whose feature film debut, Made in Cleveland, starred Busy Phillips and Gillian Jacobs, THE ENORMITY OF LIFE was nominated for “Best Feature” at the 2021 Paris Art & Movie Festival, where Breckin Meyer captured the “Best Actor” Award.

About Bayview Entertainment, LLC
BayView Entertainment, LLC, is America’s number one independent wholesale distributor of fitness, wellness, and special-interest video releases. BayView has made its name by being dedicated to releasing only the best programs in each category from the most trusted names in the field. BayView’s programs are available on DVD and Blu-ray at fine retailers everywhere as well as all major online stores, plus the major streaming sites in the United States. BayView can be found online at http://bayviewententertainment.com