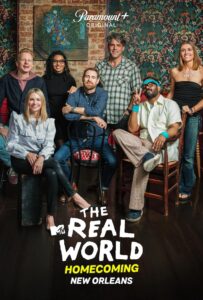 Original Archived Season of “The Real World: New Orleans” Will Be Available to Stream Wednesday, April 13

March 31, 2022 – Paramount+ today unveiled the official trailer for THE REAL WORLD HOMECOMING: NEW ORLEANS, which will premiere exclusively on the service in the U.S. and Canada on Wednesday, April 20. The series will also launch exclusively on Paramount+ in Australia and Latin America this summer. The original 23-episode season of “The Real World: New Orleans,” filmed in 2000, will come to Paramount+ in the U.S. a week earlier on Wednesday, April 13.

Produced by MTV Entertainment Studios, the third installment of the hit original unscripted series THE REAL WORLD HOMECOMING will reunite New Orleans cast members David “Tokyo” Broom, Melissa Beck, Jamie Murray, Danny Roberts, Matt Smith, Julie Stoffer and Kelley Wolf in “The Big Easy.” The roommates are moving back in for a dramatic, nostalgic, heartfelt reunion, where they’ll get a second chance to stop being polite and start getting real.

Ever since MTV’s “The Real World” was created in 1992 by Jonathan Murray and the late Mary-Ellis Bunim of Bunim/Murray Productions, it has been widely credited with launching reality TV. MTV Entertainment Studios has dominated the genre and continues to grow its unscripted library on Paramount+, which serves as the home for such hit original series as RUPAUL’S DRAG RACE ALL STARS, THE CHALLENGE: ALL STARS, BEHIND THE MUSIC, and RUPAUL’S ALL STARS: UNTUCKED.