—–Welcome to Kembleford, the sleepy Cotswolds village where seven more dastardly deeds call for Father Brown’s investigation, drawing on his astute powers of observation, remarkable intuition and deep understanding of human nature. 1953 brings murder at Lady Felicia’s illustrious New Year’s Masked Ball, a suspicious death at Chummy’s holiday camp, old wounds, lost treasures, an avenging angel, and an influential new parishioner who threatens Father Brown’s position. Mark Williams stars as the compassionate, crime-solving priest who rides his bicycle right into your heart. 2-disc set.
NOTE: this date MIGHT be for the BBC Shop release only, and it COULD be that there will be a different street date later on for this title’s release at general retail; we’re not sure as of this writing. If there’s a separate date later on for general retail, we’ll be sure to include that as part of a future Roundup.
.
COMING ON 5/17:
* The Last Kingdom – Season 5 (Universal)
$29.98 SRP DVD; $39.99 SRP Blu-ray 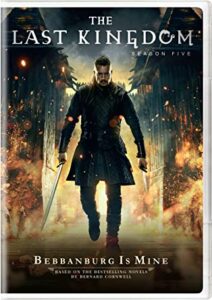 EXTRAS: Strength and Sensitivity: The Women of The Last Kingdom; The Making of Season 5
—–Years of peace have passed since the battles of last season, but as we rejoin Uhtred (Alexander Dreymon), he faces his greatest enemies, and suffers immeasurable loss, on his quest towards fulfilling his destiny. Now stationed at a northern port town, Uhtred has been entrusted with protecting the king’s illegitimate son, Aethelstan. But following a horrific attack on his family, an old enemy threatens the life he has built. Meanwhile, King Edward (Timothy Innes) is still forging ahead with his ambitions to unite the Saxon Kingdoms to fulfill his late father’s dream, threatening the long-standing peace between Danes and Saxons. However, the treacherous Lord Aethelhelm (Adrian Schiller) has ambitions of his own, for his grandson Aelfweard—Edward’s other son—to rule. As these plans lead to bloodshed and heartbreak, Uhtred finds his own fate may well be tied to the future of the nation…Destiny Is All! 4-disc set on DVD format; 3-disc set on Blu-ray Disc. 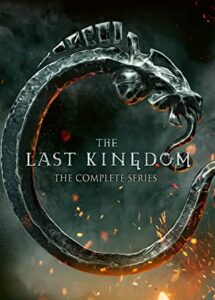 EXTRAS: Creating the World of The Last Kingdom; The Making of The Last Kingdom; The Stunts of The Last Kingdom; The Story So Far; Return to The Last Kingdom: The Making of Season 2; The Battles of The Last Kingdom Season Three; The Making of Season 4: The Return to Bebbanberg; Strength and Sensitivity: The Women of The Last Kingdom; The Making of Season 5
—–Witness the birth of England as you’ve never seen in the acclaimed series The Last Kingdom, from the makers of Downton Abbey. At the end of the 9th century, many of the separate kingdoms, which we now call England, have fallen in bloody conflict with invading Danes. Against this turbulent backdrop lives our hero, Uhtred (Alexander Dreymon). Born the son of a Saxon nobleman, he is captured by the Danes and raised as one of their own. For many years fate binds him to Alfred (David Dawson), Saxon King of Wessex. Uhtred must fight for Alfred’s dream of uniting the kingdoms. Suffering great personal tragedy, Uhtred is torn between the country of his birth and the people of his upbringing. After his father’s death, the turbulent reign of the new King Edward threatens Alfred’s dream more than ever. When faced with old enemies and fresh heartbreak, Uhtred finds his own fate tied to the future of the nation…Destiny Is All! Also starring Millie Brady, Eliza Butterworth, Emily Cox, Ian Hart, Rutger Hauer, Timothy Innes, Matthew Macfadyen, Harry McEntire, Toby Regbo, Tobias Santelmann and Adrian Schiller. Based on the bestselling novels by Bernard Cornwell. 18-disc set on DVD format; 16-disc set on Blu-ray Disc.
.
COMING ON 5/24:
* The Loud House – The Complete 3rd Season (Nickelodeon/Paramount)
$13.99 SRP DVD 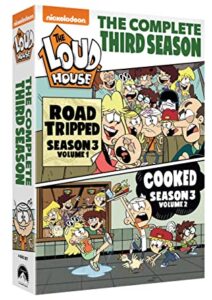 —–VOLUME 1: ROAD TRIPPED – Life’s a trip when the Louds depart on a family vacation! But while road tripping to their destination, everything that can go wrong…does. Plus, a family fridge war breaks out, Lori and Lincoln go to the big city to visit Ronnie Anne and Bobby, and Mom and Dad build a secret bathroom! Join in on all the laughs with The Loud House! VOLUME 2: COOKED – The Loud kids promise to help their Dad come up with ideas for the grand opening of his new restaurant, Lynn’s Table. But their lack of teamwork and crazy plans lead to a nightmare in the kitchen. Plus, Luna hopes to win a songwriting contest, Lori and Bobby try to bring their big families together for Thanksgiving, and so much more! 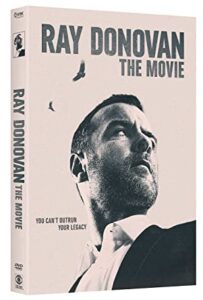 —–A showdown decades in the making brings the Donovan family legacy full circle. As the events that made Ray who he is today finally come to light, the Donovans find themselves drawn back to Boston to face the past. Each of them struggles to overcome their violent upbringing, but destiny dies hard, and only their fierce love for each other keeps them in the fight. Whether they stand together or they go down swinging, one thing is certain: Ray doesn’t do loose ends. Ray Donovan: The Movie is co-written by Liev Schreiber and “Ray Donovan” executive producer David Hollander, and stars Liev Schreiber in his five-time Golden Globe–nominated role as Ray Donovan, and Jon Voight in his Golden Globe–winning role as Mickey Donovan. Original cast members reprising their roles include Eddie Marsan as Ray’s brother Terry, Dash Mihok as Ray’s brother Bunchy, Pooch Hall as the Donovan’s half-brother Daryll, Kerris Dorsey as Ray’s daughter Bridget, Katherine Moennig as Lena, along with Kerry Condon as Molly Sullivan. Coming to DVD just four months after the Showtime debut of this wrap-up to the seven-season series!
NOTE: this has been announced for DVD format only
.
COMING ON 5/31:
* Lucifer – The Complete 5th Season (Warner)
$29.98 SRP DVD 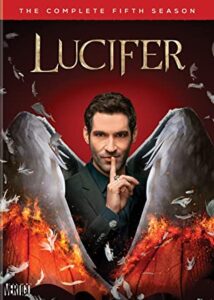 EXTRAS: Deleted Scenes; Gag Reel
—–The story of the original fallen angel continues in its next-to-last season, with the charming, charismatic and devilishly handsome Lord of Hell – Lucifer Morningstar – abandoning his kingdom for the gorgeous, shimmering insanity of Los Angeles, where he gets his kicks helping savvy LAPD detective Chloe Decker take down criminals. In the stunning fifth season of LUCIFER, the stakes are higher than ever. Secrets will be revealed, Lucifer makes a tumultuous return, Chloe rethinks romance, Ella finally finds a nice guy, and Amenadiel adjusts to the whole fatherhood thing. In the first half of the season, Lucifer’s twin brother Michael secretly takes the devil’s place on earth while he’s back in Hell. Eventually, Lucifer must return and face the mess his brother made with his life. He’ll also finally confront his feelings for Chloe, and answer a question fans have been asking since the very beginning: “will they or won’t they?” 4-disc set.
NOTE: this has been announced for DVD format only 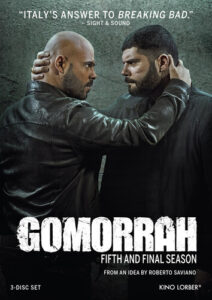 EXTRAS: trailers
—–Gomorrah: Fifth and Final Season is the thrilling conclusion to the most popular Italian drama in the world, which The New York Times recently rated #5 on its list of the top 30 international shows of the past decade. The worldwide gangster show phenomenon is based on Roberto Saviano’s best-selling book and the subsequent award-winning film of the same name. Gennaro (Salvatore Esposito) had tried his best to straighten up and build an honest life for himself and his family. Ciro (Marco D’Amore) sacrificed himself to make it possible. And now, everything has come undone. An all-out war between Patrizia and the Levante clan has turned Secondigliano and the rest of Naples to rubble, prompting Genny to get back into the game and restore order…leading to an ultimate showdown. Italian and English soundtracks. 3-disc set in either format. 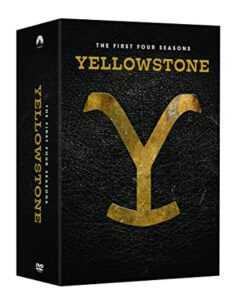 —–The first four seasons of the critically acclaimed series Yellowstone recounts the epic story of the Dutton family, who control the largest ranch in the contiguous United States. Headed by John Dutton (Academy Award winner Kevin Costner), the family faces an onslaught of attacks both from within and a world of vicious greed on the outside. Secrets, lies, dangerous liaisons and escalating violence create high stakes drama at every turn. Land developers, politicians, an Indian reservation, oil and lumbar corporations all want a piece of the billions on the line. It’s what America has come to, a wild ride through the eyes of a family that will stop at nothing to protect its legacy. Yellowstone is co-created by Taylor Sheridan (Hell or High Water and Sicario) and John Linson (Sons of Anarchy). 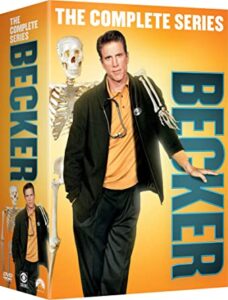 EXTRAS: Sizzle Reel; Gag Reel; Audience Warmup Reel; Cast Interviews
—–THE DOCTOR IS IN! All six seasons of the beloved sitcom are available in this DVD collection set! Becker: The Complete Series stars TV legend Ted Danson in his unforgettable role as a gruff Bronx doctor with a sharp wit and a sharper tongue. Don’t miss classic episodes like “Physician, Heal Thyself,” “One Angry Man,” and “The TorMentor” (guest-starring Leonard Nimoy) in Becker: The Complete Series. Includes 129 episodes! 17-disc set.
NOTE: this title was previously released in 2017, but was discontinued; the studio is now re-releasing it for fans who might have previously missed out
.
COMING ON 6/14:
* The Little Rascals – The ClassicFlix Restorations, Volume 6 (ClassicFlix)
$39.99 SRP Blu-ray 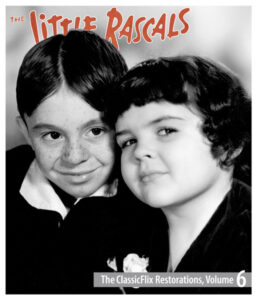 —–Remastered, uncut and beautifully restored, now you can see The Little Rascals like never before! With restorations so glorious, it will be like watching these iconic shorts for the first time! By 1935, the writing was on the wall for the staple at Hal Roach Studios: two-reel comedies. While his short films were still popular with the public, Roach’s filmic output was losing ground financially to double features, necessitating that his stars either transition to feature films (like Laurel & Hardy) or find employment elsewhere. An exception was made for Our Gang as the producer continued to make one-reelers featuring the kiddie troupe with the focus on five members: Spanky, Alfalfa, Darla, Buckwheat and Porky. With the length of the shorts cut in half (Our Gang Follies of 1938 [1937] being an exception), the finished streamlined product was both cost-effective and profitable. The change didn’t seem to hurt the franchise either as the first one-reeler, Bored of Education (1936), won the Academy Award for Best (One-Reel) Short Subject the following year. In 1938, after two additional years of cranking out classic comedies, Roach would sell the property to MGM where the series continued until 1944. The Little Rascals – The ClassicFlix Restorations, Volume 6 contains the final 23 Our Gang sound shorts produced by the Hal Roach Studios: Bored of Education (1936) to Hide and Shriek (1938)—with each short newly scanned and restored from the original Hal Roach 35mm film elements. A must-have for any true Our Gang fan, Volume 6 features the talents of George “Spanky” McFarland, Billie “Buckwheat” Thomas, Carl “Alfalfa” Switzer, Darla Hood, Eugene “Porky” Lee, Tommy “Butch” Bond and Sidney “Woim” Kibrick. There are also special appearances from former members Mickey Daniels, Mary Kornman, Joe Cobb and Matthew “Stymie” Beard! SHORTS: 1936 – Bored of Education; Two Too Young; Pay as You Exit; Spooky Hooky; 1937 – Reunion in Rhythm; Glove Taps; Hearts are Thumps; Rushin’ Ballet; Three Smart Boys; Roamin’ Holiday; Night ‘n’ Gales; Fishy Tales; Framing Youth; The Pigskin Palooka; Mail and Female; Our Gang Follies of 1938; 1938 – Canned Fishing; Bear Facts; Three Men in a Tub; Came the Brawn; Feed ’em and Weep; The Awful Tooth; Hide and Shriek