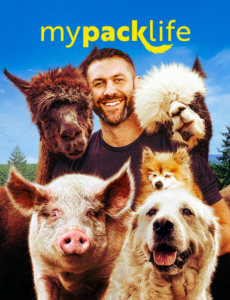 Some say that a house is not a home without a dog – but what about 21 rescue dogs, 2 donkeys, some pigs, an alpaca, a goat… and a very awkward llama? For Lee Asher, it’s not only another day in paradise, but it’s a chance to take on the animals who are underdogs just like him and to show them the love, confidence, and stability they need to thrive in his Oregon-based sanctuary, The Asher House. Join Lee and his extended furry-family as he goes above and beyond to create a modern-day Noah’s Ark through his sanctuary not only to provide a space for these animals, but to build a home and the best life imaginable for every animal in need. The all-new series MY PACK LIFE, produced in association with The Dodo, streams exclusively on discovery+ beginning Sunday, February 13, with the first two episodes airing on Animal Planet out of Puppy Bowl XVIII.

In MY PACK LIFE, we’ll meet Lee, who, as a child, overcame obstacles including bullying, but always saw animals as a source of healing and understanding. Eventually, after becoming a part of corporate America, he decided to leave it all behind and follow his passion of rescuing dogs by traveling the country to promote animal adoption and to emphasize that no matter any animal’s shape, size, or species, they deserve a forever home. Now, Lee and his pack have moved to 25-acres of lush Oregon land to establish his dream sanctuary, The Asher House, where all animals including dogs, donkeys, goats, pigs, and more are all welcome to a loving home. Lee’s only rule? That they’re an underdog, just like him!

Throughout the all-new series, we’ll follow Lee on his journey to bring this sanctuary to life and welcome animals from all walks of life into his home. In the two back-to-back premiere episodes we’ll meet members of his rescue pack, including Rosa, a rescue dog who is building her swimming confidence back; Molly, a chihuahua who has also been dubbed the pack’s ‘little old lady,’ and so many others. We’ll also meet Lee’s extended livestock family, including Franky, an inquisitive and socially awkward llama; Princess, an alpaca who looks suspiciously pregnant; and Vincent Van Goat, who seems to think Lee is his older brother.

Audiences will also be introduced to other amazing rescue animals throughout the series including rescue dog, Charles, who is on a weight-loss journey to become a healthier, happy dog to prevent health issues; Aries, a ram who was abandoned after his family abandoned him on their 80-acres of land; Sarge, a special dog who is being flown out by Pet Rescue Pilots to join the Asher House, and more.

MY PACK LIFE is produced for discovery+ by B17 Entertainment in association with The Dodo and Group Nine Studios.Rhett Bachner, Brien Meagher, Aliyah Silverstein, Dave Luce, Joanna Zelman, Lily Ladewig, and Izzie Lerer, are executive producers. For Animal Planet, Pat Dempsey is supervising producer, and Marissa Donovan is production coordinator.

About discovery+
discovery+ is the definitive non-fiction, real life subscription streaming service. discovery+ has the largest-ever content offering of any new streaming service at launch, featuring a wide range of exclusive, original series across popular, passion verticals in which Discovery brands have a strong leadership position, including lifestyle and relationships; home and food; true crime; paranormal; adventure and natural history; as well as science, tech and the environment, and a slate of high-quality documentaries. For more, visit discoveryplus.com or find it on a variety of platforms and devices, including ones from Amazon, Apple, Google, Microsoft, Roku and Samsung.