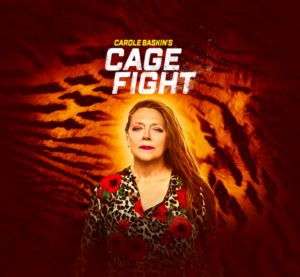 Carole Baskin was thrust into the spotlight when “Tiger King” transformed the big cat activist and business owner into a pop culture phenomenon. The series fueled rumors about Baskin’s business and personal life, which she dismisses as gossip spread by her foes in an effort to detract from her life’s mission: to finally end the abuse of big cats in the United States. In CAROLE BASKIN’S CAGE FIGHT, which streams Saturday, Nov. 13 exclusively on discovery+, the definitive non-fiction, real-life subscription streaming service, audiences will witness a very different side to Carole Baskin. In the two-part doc series from ITV America’s Thinkfactory Media, Baskin and her husband Howard, along with their team, get their hands dirty and investigate the treatment of big cats, often coming into direct confrontations with dangerous operators.

In January 2020, Joe Exotic (AKA Joseph Maldonado-Passage), who ran the infamous G.W. Zoo out of Wynnewood, OK, was sentenced to 22 years in federal prison after being convicted of a murder-for-hire plot to kill Baskin. Later, a federal judge awarded the property to Baskin and her Big Cat Rescue in June 2020. With the property firmly in her control, and with the help of retired homicide detective Griff Garrison, CAROLE BASKIN’S CAGE FIGHT documents Baskin and her team as they investigate the property for lingering evidence of animal trafficking and abuse treatment, revealing many shocking moments along the way. During the search, Baskin also enlists help from an unlikely source – Joe Exotic’s niece, Chealsi – who spent much of her childhood working at G.W. Zoo and has first-hand knowledge of what went on behind the scenes. Chealsi directs Baskin and the investigators to different areas around the zoo in pursuit of evidence such as animal remains, with some unbelievable findings along the way.

“Carole Baskin’s Cage Fight reveals Carole’s story in her own words,” said Amy Introcaso-Davis, Executive Vice President Development and Production Factual Programming, Discovery. “Viewers will see this larger than life personality in the fight for her beloved big cat’s lives as she uncovers and stops the exploitation of these animals.”

“This is a unique opportunity for audiences to come ‘behind the scenes’ with us for an unfiltered look at how we expose the cub petting exploiters and roadside zoos we feel are mistreating animals. This is our real-life work within a dangerous world, and viewers will see it comes with our people being threatened, guns pointed at us and the bad guys shooting at our drones,” said Baskin.

Baskin’s investigators and most trusted Big Cat Rescue volunteers also launch separate missions to capture evidence of illegal zoo tours and animal abuse at roadside zoos. What they discover is startling and further adds to the web of lies around the world of animal trafficking – their findings leading them on a trail to a former drug dealer in Miami…

About discovery+
discovery+ is the definitive non-fiction, real life subscription streaming service. discovery+ features a landmark partnership with Verizon that gives their customers with select plans up to 12 months of discovery+ on Verizon. discovery+ has the largest-ever content offering of any new streaming service at launch, featuring a wide range of exclusive, original series across popular, passion verticals in which Discovery brands have a strong leadership position, including lifestyle and relationships; home and food; true crime; paranormal; adventure and natural history; as well as science, tech and the environment, and a slate of high-quality documentaries. For more, visit discoveryplus.com or find it on a variety of platforms and devices, including ones from Amazon, Apple, Google, Microsoft, Roku and Samsung.

About Thinkfactory Media
Thinkfactory Media, an ITV America company, creates high-quality content for an array of television networks, streaming and digital platforms. Run by CEO Adam Reed and based in Los Angeles, Thinkfactory is revered for its breadth of long-running unscripted franchises. Series and event specials include discovery+’s Carole Baskin’s Cage Fight; TBS’s upcoming Rat in the Kitchen; WE tv mega-hits Mama June: From Not to Hot and Million Dollar Matchmaker, as well as the network’s Marriage Boot Camp empire, encompassing flagship “Reality Stars,” as well as “Family Edition” and “Hip Hop Edition;” and A&E’s Nature Gone Wild and What’s it Worth?, hosted by Jeff Foxworthy; among many others.