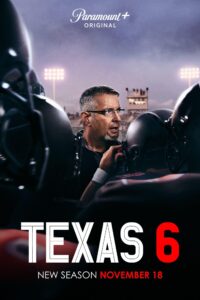 The Emmy-Nominated First Season of the Docuseries

Is Available to Stream Exclusively on Paramount+

Oct. 7, 2021 – Paramount+, the streaming service from ViacomCBS, today released the official key art and trailer for season two of its original docuseries TEXAS 6, which will premiere on Thursday, Nov. 18. All eight episodes of the second season will be available to binge on Nov. 18, exclusively on the service.

From Jared L.Christopher (“Titletown, TX”), TEXAS 6 follows the Greyhounds, a six-man high school football team under the direction of Coach Dewaine Lee. After a devastating defeat in the semifinals the previous year, the second season finds the Greyhounds chasing redemption. However, as external pressures mount and adversity abounds, Coach Lee and his team turn to the family they’ve cultivated on the field.

In addition to TEXAS 6, Paramount+’s growing slate of documentary programming includes docuseries DREAM TEAM: BIRTH OF THE MODERN ATHLETE, BEHIND THE MUSIC, FROM CRADLE TO STAGE, FOR HEAVEN’S SAKE, THAT ANIMAL RESCUE SHOW, as well as documentary films SIR ALEX FERGUSON: NEVER GIVE IN, CHER AND THE LONELIEST ELEPHANT, Kacey Musgraves’ STAR-CROSSED : THE FILM and Madonna’s concert film MADAME X, premiering Oct. 8 on the service.