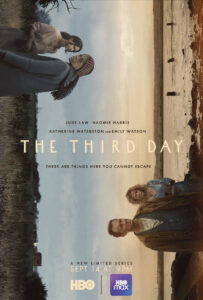 Created by Felix Barrett and Dennis Kelly, the six-part limited series THE THIRD DAY debuts MONDAY, SEPTEMBER 14 (9:00-10:00 p.m. ET/PT), exclusively on HBO. Starring Jude Law and Naomie Harris, the psychological thriller is set on a mysterious British Island where all is not as it seems.

The limited series will be available on HBO and to stream on HBO Max.

Along with Jude Law and Naomie Harris, THE THIRD DAY also stars Katherine Waterston (“Fantastic Beasts” franchise), Emily Watson (Emmy® and Golden Globe nominee for HBO’s “Chernobyl”) and Paddy Considine (HBO’s “The Outsider”). The six episodes of THE THIRD DAY are divided into “Summer” and “Winter.”

Told over the first three episodes, “Summer” stars Jude Law (HBO’s “The New Pope”) as Sam, a man who is drawn to a mysterious island off the British coast where he encounters a group of islanders set on preserving their traditions at any cost. Isolated from the mainland, Sam is unable to leave the idyllic and dangerously enchanting world he has discovered, where the secretive rituals of its inhabitants bring him to grapple with experiences of loss and trauma hidden in his past through the distorted lens of the present. As boundaries between fantasy and reality fragment, his quest to unlock the truth leads the islanders to reveal a shocking secret. “Summer” is written by Dennis Kelly and directed by Marc Munden.

“Summer” characters include:
SAM (JUDE LAW) Sam, a kind family man from London, is brought to the island after helping one of its young residents. He finds himself drawn to the Island, however it begins to take a psychological tole on Sam, as he begins to relive trauma from his past.
JESS (KATHERINE WATERSTON) Jess is an American historian, and frequent visitor to the island. She is fascinated by the island’s history and culture and is keen to share what she knows. She has a forthright, but comfortable nature about her, and becomes a confidant to Sam.
MRS. MARTIN (EMILY WATSON) Mrs. Martin runs the local pub, The Oyster, with her husband. Brash and foul-mouthed, her bark is worse than her bite. She and her husband are respected pillars of the community, who proudly uphold the island’s traditions.
MR. MARTIN (PADDY CONSIDINE) Mr. Martin runs the local pub, The Oyster, with his wife. He is a fastidious, cheerful man who always looks at the bright side of things. He is quick to help Sam and welcomes him to the island with open arms.
LARRY (JOHN DAGLEISH) Larry is a violent local, keen on causing trouble. He is a close friend of Jason’s who wants Sam off the island, and he will stop at nothing to see him gone.
JASON (MARK LEWIS JONES) Jason is a local, and father to Epona, the young girl Sam helps. He is a troubled man who is suspicious of Sam and is unhappy with him staying on the island.

After “Summer,” comes “Fall,” a theatrical event broadcast online where viewers who seek more will be immersed in the world of THE THIRD DAY. Featuring members of The Third Day cast including Jude Law and Katherine Waterston, viewers will follow the events of a single day in real time. Florence Welch will also feature in an acting role. Capturing events as live and in one continuous take, this cinematic broadcast will invite viewers deeper into the mysterious and suspenseful world of The Third Day, and blur and distort the lines between what’s real and what’s not. It is created by theatrical innovators Punchdrunk and co-directed by founder and artistic director of Punchdrunk Felix Barrett and “Summer” director Marc Munden.

“Winter” unfolds over the latter three episodes and stars Naomie Harris (Academy Award nominee for “Moonlight”) as Helen, a strong-willed outsider who comes to the island seeking answers, but whose arrival precipitates a fractious battle to decide its fate as the lines between fantasy and fact are distorted. “Winter” is written by Kit De Waal, Dean O’Loughlin and Dennis Kelly and directed by Philippa Lowthorpe.

“Winter” characters include:
HELEN (NAOMIE HARRIS) Helen, strong-willed and pragmatic, comes to the island with her daughters, Ellie and Talulah. She soon finds herself caught between the opposing factions on the island and must quickly determine who can be trusted.
ELLIE (NICO PARKER) Ellie comes to the island with her mother and sister to celebrate her birthday. Quiet and considerate, Ellie has been having trouble at school and finds solace in religion. She takes a liking to the island and befriends a local girl, who introduces her to the Island’s culture and traditions.
TALLULAH (CHARLOTTE GAIRDNER-MIHELL) Tallulah, bright and opinionated, is Helen’s youngest daughter. She is less taken by the island than her sister and is keen to get back to the creature comforts that await on the mainland.
COWBOY (PAUL KAYE) Though not being an island native, the Cowboy is a true believer of the island’s customs and traditions. Ready to assist a fellow outsider, he helps Helen navigate the fractious battleground the island has become.

Episode 1: “Friday – The Father”
Debut date: MONDAY, SEPTEMBER 14 (9:00-10:00 P.M. ET/PT)
After Sam (Jude Law), a London family man in crisis, rescues a troubled young girl in the woods, he brings her home to the ominous Osea Island, where inhabitants are preparing for a curious annual festival involving the island’s history. As he meets Osea’s secretive locals, Sam grows increasingly desperate to return to the mainland to make an important call – but the island proves difficult to escape.
Written by Dennis Kelly; directed by Marc Munden.

Episode 2: “Saturday – The Son”
Debut date: MONDAY, SEPTEMBER 21 (9:00-10:00 P.M. ET/PT)
Plagued by a disturbing dream, Sam (Jude Law) awakes to find himself in a compromising situation and, having missed the morning crossing to return to the mainland, spends the day trying to learn more about the islanders’ beliefs. After a series of confusing and terrifying events leaves him shaken, Sam quickly plots a way off Osea with Jess (Katherine Waterston), but is convinced to stay put as the islanders prepare for a dry run of their big event.
Written by Dennis Kelly; directed by Marc Munden.

Episode 3: “Sunday – The Ghost”
Debut date: MONDAY, SEPTEMBER 28 (9:00-10:00 P.M. ET/PT)
Sam (Jude Law) is shocked to learn the truth about his connection to Osea and the islanders’ intentions for his future. Later, in a fight for his life, Sam tries desperately to escape their clutches and make it back to the mainland in one piece.
Written by Dennis Kelly; directed by Marc Munden.

Episode 4: “Monday – The Mother”
Debut date: MONDAY, OCTOBER 5 (9:00-10:00 P.M. ET/PT)
Winter. Helen (Naomie Harris) surprises her two daughters, Tallulah (Charlotte Gairdner-Mihell) and Ellie (Nico Parker), with a trip to Osea Island for Ellie’s birthday. After finding that the cottage she booked is suspiciously no longer available, Helen scours the island for a place to stay, but finds resistance at every turn.
Written by Kit de Waal, Dean O’Loughlin and Dennis Kelly; directed by Philippa Lowthorpe.

Episode 5: “Tuesday – The Daughter”
Debut date: MONDAY, OCTOBER 12 (9:00-10:00 P.M. ET/PT)
As the islanders prepare for a fateful birth, Helen (Naomie Harris) reveals her true intentions in coming to Osea and, after joining a search party, is pressed on her past. A peculiar girl befriends Ellie (Nico Parker) and offers to take her to a mysterious place closed off to outsiders.
Written by Kit de Waal, Dean O’Loughlin and Dennis Kelly; directed by Philippa Lowthorpe.

THE THIRD DAY is a co-production between Sky and HBO. It is the first original drama to be produced by Sky’s new production house, Sky Studios, in conjunction with Plan B Entertainment, the world-renowned immersive theatre company Punchdrunk and writer Dennis Kelly (“Utopia,” “Pulling”). Dede Gardner, Jeremy Kleiner, Felix Barrett and Dennis Kelly executive produce.