1964 – The Dave Clark Five appeared on “The Ed Sullivan Show” for the first of 11 appearances.

1960 – Johnny & the Hurricanes performed “Down Yonder” on American Bandstand.

1969 – Classics IV performed “The River is Wide” and “I’d Wait a Million Years” on American Bandstand.

1975 – Disco Tex and the Sex-O-Lettes performed “I Wanna Dance wit’Choo” on American Bandstand.


DISCOVERY AND SCIENCE CHANNEL CAPTURE NASA LAUNCH OF SPACEX’S CREW DRAGONCAPSULE, FIRST CREWED ORBITAL SPACE MISSION IN THE U.S. IN NEARLY 9 YEARS(LOS ANGELES) –Discovery and Science Channel documented history in the making today at the NASA launch of SpaceX’s Crew Dragon capsule from the Kennedy Space Center in Cape Canaveral, Fla. The event marks the first crewed space mission to be launched into orbit from U.S. soil since 2011. SPACE LAUNCH LIVE: AMERICA RETURNS TO SPACE, a multiplatform event, took viewers inside the launch, airing live across Discovery and Science Channel.

“Discovery and Science Channel have spent over a year documenting SpaceX’s race to become the first private company to launch American astronauts into space. Our live special offered both incredible access for the launch, and expert insight from SpaceX Founder and Chief Engineer Elon Musk and other leading aerospace professionals. In our two-hour documentary, we showed the unbelievable engineering and scientific feats achieved by SpaceX in making such an historic launch happen,” said Scott Lewers, Executive Vice President of Multiplatform Programming, Factual & Head of Content, Science.

The live multiplatform event took viewers along the mission to launch veteran astronauts Bob Behnken and Doug Hurley to the ISS on a SpaceX Crew Dragon spacecraft. The mission, known as Demo-2, used a Falcon 9 rocket, also built by SpaceX, to propel it. Discovery and Science Channel coverage also featured commentary from astronauts, engineers and other special guests, as well as unprecedented coverage during launch from NASA’s Kennedy Space Center.

The live broadcast and accompanying two-hour documentary were made in partnership with The Washington Post and staff writer Christian Davenport, whose depth of experience allowed him to gain inside access to key players–including a rare in-depth interview with SpaceX Founder and Chief Engineer Elon Musk–and captured their incredible stories about this historic space achievement. Washington Post reporter and Peabody award-winning journalist Christian Davenport is one of the country’s leading chroniclers of the space industry. His background and experience will add keen insight to the day’s event, as a co-host of the live broadcast.

Davenport joined The Post in 2000 and was on a team that won a Peabody Award in 2010 for its work on veterans with traumatic brain injuries and has been on reporting teams that were finalists for the Pulitzer Prize three times. He is the author of two books, “The Space Barons: Jeff Bezos, Elon Musk and the Quest to Colonize the Cosmos” (2018) and “As You Were: To War and Back with the Black Hawk Battalion of the Virginia National Guard” (2009). He has also served as a Public Policy Scholar at the Woodrow Wilson International Center for Scholars and a fellow at the Alicia Patterson Foundation.

TV personality Chris Jacobs hosted the special live from Los Angeles. Jacobs has a long history with Discovery network live events, reporting live on-the-ground for EXPEDITION UNKNOWN: EGYPT LIVE as well as serving as the digital host during Nik Wallenda’s tightrope walk over the Grand Canyon in SKYWIRE LIVE and in Chicago for SKYSCRAPER LIVE. Jacobs was host for DISCOVERY LIVE: INTO THE BLUE HOLE, CHOPPER LIVE, GOLD RUSH LIVE and the live broadcast of the Barrett-Jackson Auto Auction for Velocity (now MotorTrend).In addition, he is the regular host for TLC’s LONG LOST FAMILY and serves as host of the popular automotive makeover show OVERHAULIN’ on MotorTrend.

Emmy Award-winning journalist David Kerley was part of the reporting team on the ground at Kennedy Space Center. Kerley has reported on aviation, railroads, the automobile industry and space for all ABC News broadcast and digital properties since 2004, including “World News Tonight,” “Good Morning America,” “Nightline,” ABC News Radio and ABCNews.com. His work has been recognized with Peabody and Edward R. Murrow awards as well as the prestigious Joan Barone award from the Capitol Hill Radio and Television Correspondents Association.

The networks also aired a special2-hour documentary NASA & SPACEX: JOURNEY TO THE FUTURE featuring exclusive access to the incredible journey leading up to this launch. The film crew was granted unprecedented access to NASA and to SpaceX headquarters –giving viewers a rare glimpse inside Launch Control and first-hand accounts from SpaceX Founder and Chief Engineer Elon Musk, Astronauts Bob Behnken and Doug Hurley and NASA Administrator Jim Bridenstine. The documentary reveals the behind-the-scenes action with the teams of SpaceX engineers, NASA employees and scientists as they fulfill the SpaceX mission to “fly, test, and fix” their way to the ISS –with the goal of eventually flying to the moon and to Mars.

About Discovery Channel Discovery Channel is dedicated to creating the highest quality non-fiction content that informs and entertains its consumers about the world in all its wonder, diversity and amazement. The network, which is distributed to 100.8 million U.S. homes, can be seen in 224 countries and territories, offering a signature mix of compelling, high-end production values and vivid cinematography across genres including, science and technology, exploration, adventure, history and in-depth, behind-the-scenes glimpses at the people, places and organizations that shape and share our world. For more information, please visitwww.discovery.com

About Science Channel Science Channel, a multi-media business unit of Discovery, Inc.is the home of all things science around the clock, including series such as MYTHBUSTERS, OUTRAGEOUS ACTS OF SCIENCE, WHAT ON EARTH?, HOW THE UNIVERSE WORKS, UNEARTHED, and MYSTERIES OF THE ABANDONED. Science Channel’s programming also includes timely, expert-driven specials covering breaking science news and discoveries. Science Channel is the premiere TV, digital and social community for those with a passion for science, space, technology, archeology, and engineering, providing immersive, engaging, high-quality entertainment across all Science Channel assets including: Science Channel television network, available in more than 63 million homes in the U.S; complimentary Video On Demand offering; SCI Go app allowing viewers to catch up on full episodes of their favorite shows anytime; deep video, interactive storytelling and virtual reality atwww.sciencechannel.com; and conversations on Science Channel’s popular social platforms including Facebook, Twitter, Instagram and Snapchat via @ScienceChannel. 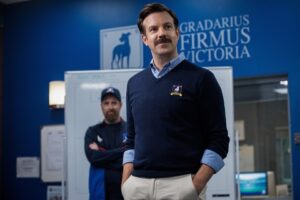 Apple today unveiled a first look at “Ted Lasso,” a new original comedy series from Jason Sudeikis and Bill Lawrence, that will premiere globally on Apple TV+, alongside a slate of acclaimed and award-winning original series and films, on Friday, August 14.

Sudeikis plays Ted Lasso, a small-time college football coach from Kansas hired to coach a professional soccer team in England, despite having no experience coaching soccer.

In addition to starring, Sudeikis serves as executive producer, alongside Lawrence (“Scrubs”) via his Doozer Productions, in association with Warner Bros. Television and Universal Television, a division of NBCUniversal Content. Doozer’s Jeff Ingold also serves as an executive producer with Liza Katzer as co-executive producer. The series was developed by Sudeikis, Lawrence, Joe Kelly and Brendan Hunt, and is based on the pre-existing format and characters from NBC Sports.

Apple TV+ is available on the Apple TV app on iPhone, iPad, Apple TV, iPod touch, Mac, select Samsung and LG smart TVs, Amazon Fire TV and Roku devices, as well as at tv.apple.com, for $4.99 per month with a seven-day free trial. The Apple TV app will be available on Sony and VIZIO smart TVs later this year. For a limited time, customers who purchase a new iPhone, iPad, Apple TV, Mac or iPod touch can enjoy one year of Apple TV+ for free. This special offer is good for three months after the first activation of the eligible device.1 For more information, please visit apple.com/tvpr.

1975 – On “Midnight Special,” Joan Baez welcomed Kool & the Gang into the studio.

1980 – On “Midnight Special,” the Temptations hosted. The guests were Firefall and Robbie Dupree.

1970 – Bobbi Martin performed “For the Love of Him” and “Give a Woman Love” on American Bandstand.

These listings are subject to change.

Monday, June 1 – Dwayne Johnson on the new season of NBC’s “The Titan Games”

Wednesday, June 3 – Erika Jayne on this season’s “The Real Housewives of Beverly Hills” on Bravo

Friday, June 5 – Jason Derulo on “Healing Through Music” where artists do surprise virtual performances for patients, family members and caregivers in hospitals

Listings are subject to change.

E! brings fans even more custom content when and where they are watching with the introduction of new live daytime broadcast series, “Daily Pop.” Hosted by pop culture personalities Carissa Culiner, Morgan Stewart and Justin Sylvester, the program delivers fun, insightful and relatable conversations centered around the biggest, most fascinating pop culture stories of the day. “Daily Pop” airs weekdays at 12:30pm ET/PT on E!.

(7-9 a.m.) TODAY brings the latest news and up-to-date information on the coronavirus pandemic. Chance the Rapper on TODAY. Kimberly Schlapman on TODAY.

(7-9 a.m.) TODAY brings the latest news and up-to-date information on the coronavirus pandemic.

(10-11 a.m.) John Malkovich on Netflix’s Space Force. Emily Giffin on The Lies that Bind. Plus, the best of TODAY with Hoda & Jenna.

(7-9 a.m.) TODAY brings the latest news and up-to-date information on the coronavirus pandemic.

(9-10 a.m.) TODAY brings the latest news and up-to-date information on the coronavirus pandemic. CAMP FROM THE COUCH: Gardening with Al and The Gangsta Gardener Ron Finley. Overheard on 3rd. Shane McAnally on TODAY.

(10-11 a.m.) Marie Forleo on her book Everything is Figureoutable. Plus, the best of TODAY with Hoda & Jenna.

Stream new episodes of In The Dark Fridays free only on The CW!

In The Dark | Codependence Day Promo

Stream new episodes of In The Dark Fridays free only on The CW: https://go.cwtv.com/genITDyt

“Jimmy Kimmel Live!” airs every weeknight at 11:35 p.m. EDT and features a diverse lineup of guests that includes celebrities, athletes, musical acts, comedians and human-interest subjects, along with comedy bits and a house band.

Following are the episodes scheduled to air the week of JUNE 1-5 (subject to change):