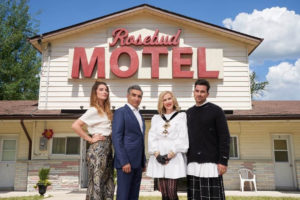 LOS ANGELES – MARCH 12, 2020 – After six celebrated seasons and enough awards and nominations to make Moira Rose swoon, Pop TV is celebrating its breakout hit SCHITT’S CREEK with the ultimate farewell for fans: an intimate behind-the-scenes look at the beloved series with the special Best Wishes, Warmest Regards: A Schitt’s Creek Farewell. The inside look will debut on Pop TV on April 7 at 8:30PM ET/PT immediately following the series finale, which is being supersized in a simulcast across Pop TV, Comedy Central and Logo in a special event at a new time, 8PM ET/PT.

“As we celebrate the end of SCHITT’S CREEK, we couldn’t do it without creating a special TV moment to send this historic series out on top,“ said Brad Schwartz, President, Pop TV. “This must-watch behind the scenes doc is the perfect way to honor a series that has made an impact in so many people’s lives, with enduring characters and stories filled with heart, humor and honesty that will stand the test of time.”

BEST WISHES, WARMEST REGARDS: A SCHITT’S CREEK FAREWELL, directed by Amy Segal, is a celebration of the four-time Emmy®-nominated comedy series and its undeniable cultural impact. Fans will go behind the scenes for the first time, with never-before-seen footage of wardrobe fittings, the emotional final table read, audition tapes, and more. The special will feature interviews with the cast, creators, journalists, and celebrity superfans including Paula Abdul, Will Arnett, Carol Burnett, Cameron Crowe, Tony Hale, Amy Sedaris, Johnny Weir, and more.

About Pop TV
Pop TV, part of the ViacomCBS Entertainment & Youth Group, is a fully distributed entertainment media brand featuring fun, comedy-leaning programming for The Modern Grownup® – engaged fans, raised on network TV, who came of age in the ‘80s and ‘90s. Pop is TV the way it should be – effortlessly entertaining and home to some of the most buzzed-about shows in all of television. They include pop culture phenomenon and four-time Emmy®-nominated comedy series Schitt’s Creek, and fan-adored, culturally significant, One Day At A Time. Pop TV also features a lineup of “Still Awesome” movies and television hits our audience grew up enjoying including: Beverly Hills 90210, Charmed, ER and Gilmore Girls. Pop is available on all major cable and satellite providers, through the downloadable app PopNow and on most over-the-top streaming services. To learn more, visit https://poptv.com/.